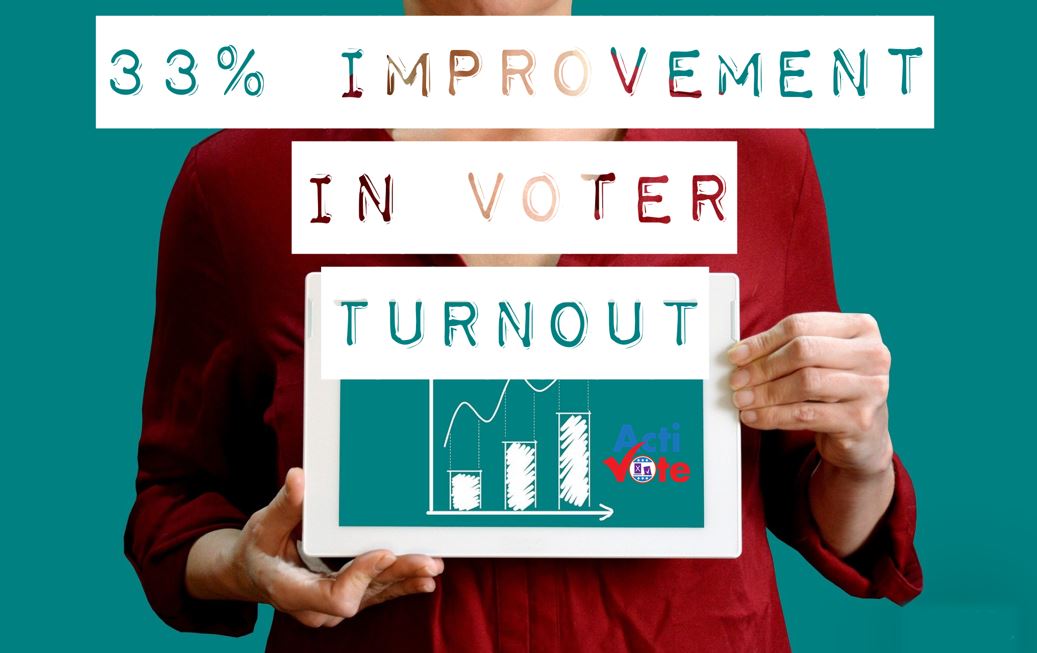 ActiVote aims to help you participate in our democracy.

Many users have told us that they love our app and that makes us happy. However, ultimately, what we really want our users to do is: vote! So, we asked ourselves the following question:

“Are users of ActiVote voting and are they doing so in larger numbers than then they would otherwise?”

The short answer is: yes they are! The moment a voter downloads our app it increases their chance to vote by 33%.

In this post we will dive into the details of how we measured this, which voters turn out more, in what type of elections, and in which states we see these improvements.

So if you’re going to stop reading here – what that means is that we all need to get as many voters as possible engaging with the app to help ensure participation rates stay high and keep growing!

For every voter in the country we calculate their voting chance per election, based on their turnout in previous elections. For voters who have been registered for 40 years and participated in, or sat out, many elections, the calculation is all based on their past behavior. For newly registered voters, we determine their initial voting chances by looking at what other voters like them typically do.

Our 16-month research of our voting chance calculations predicted that 104 million votes would be cast in the group of local, special, primary and presidential primary elections that were in scope. In fact, 109 million votes were cast! So the actual turnout was 105% of our expected number. Thus, America showed up to vote a little bit more than expected based on past behavior. We then looked at the expected turnout among ActiVote users and compared that with their actual voting behavior. The turnout among our users was up to 139% of their expected turnout!

From these results we can deduce that the additional turnout of ActiVote users compared to all others is 33%. Given that our goal is increased voter participation – this suggests that our app supports our mission.

What kind of voters turn out more often?

But what if someone was an absolute lock to vote anyway? How can ActiVote claim that their turnout increases by 33%? 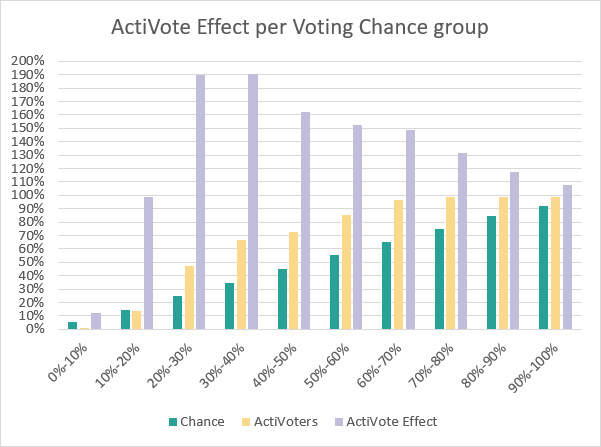 We have grouped the elections based on the voting chance that a user had in that election. Suppose one voter never really votes in Local elections and had a 5% chance to show up there, but that same voter often votes in Presidential Primaries, with a 65% chance. Then, this voter’s local election would be counted in the 0%-10% bucket, while their Presidential Primary election will be counted in the 60%-70% bucket.

Let’s look at the 30%-40% bucket as the most interesting one. The green bar indicates that people in that group had a 35% chance to go vote. The yellow bar shows that they actually showed up in 66% of the cases – almost twice as often! To be exact: they showed up 191% more often than expected (depicted by the grey bar).

If we look at all the grey bars, we can see that the largest positive effect was for that group of the 30%-40% expected voters. For the next group turnout increased significantly as well, from an expected 45% to 73%. If we go all the way to the right: voters who were expected to vote in 92% of the elections actually showed up 99% of the time. Still an improvement through ActiVote, but now only a modest increase of 8%. Already great voters became near-perfect voters.

The conclusion is that all voters that had a 30% or more chance to vote increased their voting chance, but that the increase is (logically) smaller, the higher the original chance of voting was.

The clear conclusion is that ActiVote has the largest impact on voters who are irregular voters, as their chance to vote increases significantly, sometimes almost doubling. ActiVote also has a positive effect on regular voters, by helping them turnout even more frequently.

Does this hold true for all elections?

For the period of our investigations there were no Presidential or Midterm elections. In the other 4 election types, approximately 50M votes were cast in the Presidential Primaries, about 30M in local elections, 12M in primaries, and 10M in special elections.

What we can see is that the turn out (green bars) for the Presidential Primaries and the Local elections were just over the expected turn out, while ActiVote users (yellow bars) turned out at almost 140% of their expected turnout.

Overall, the grey bars show that ActiVote users turnout more often than non-users in all types of elections.

Is this true in all states?

ActiVote has users in all 50 states + DC. In the graph below we have taken a sample of 13 states, sorted by turnout compared by expectations.

On the left we see Texas with a turnout of only 80% of what we expected. ActiVote users showed up strongly with 130% of expectation leading to the highest turnout effect of any state in this list.

On the right we see Colorado (a mail-in only state), where turnout was 143% of expectations. ActiVote users did even better with 159% turnout. However, the “ActiVote effect” was therefore relatively small in Colorado.

From the table it can be seen that ActiVote user turnout ranged from 127%-171% of expectations and the ActiVote effect ranged from 111%-168%. Although there are differences between states, ActiVote increases turnout in small and large states, and in red, blue and swing states.

Can ActiVote claim all the credit for the “ActiVote Effect”?

It is a legitimate question to ask whether ActiVote users voted because of their usage of the app, or that those people downloading the app are already predisposed to vote more often.

We believe the answer is “both”.

When someone makes a New Year’s resolution to get fit and takes a gym membership to start acting on it, the resolution is half the work. Still, if the gym is a stimulating environment to be in, and makes the workouts enjoyable, the gym plays a key role in their fitness as well.

Similarly, we cannot make people download our app, but once they do, we can help them make the experience interesting and stimulating and thereby help them vote.

We are encouraged that so many people do, and we will keep working hard to help people exercise their “political muscles” so that they keep voting in every election.

So if you’re still with us and you’re convinced – get everyone you know to download ActiVote!