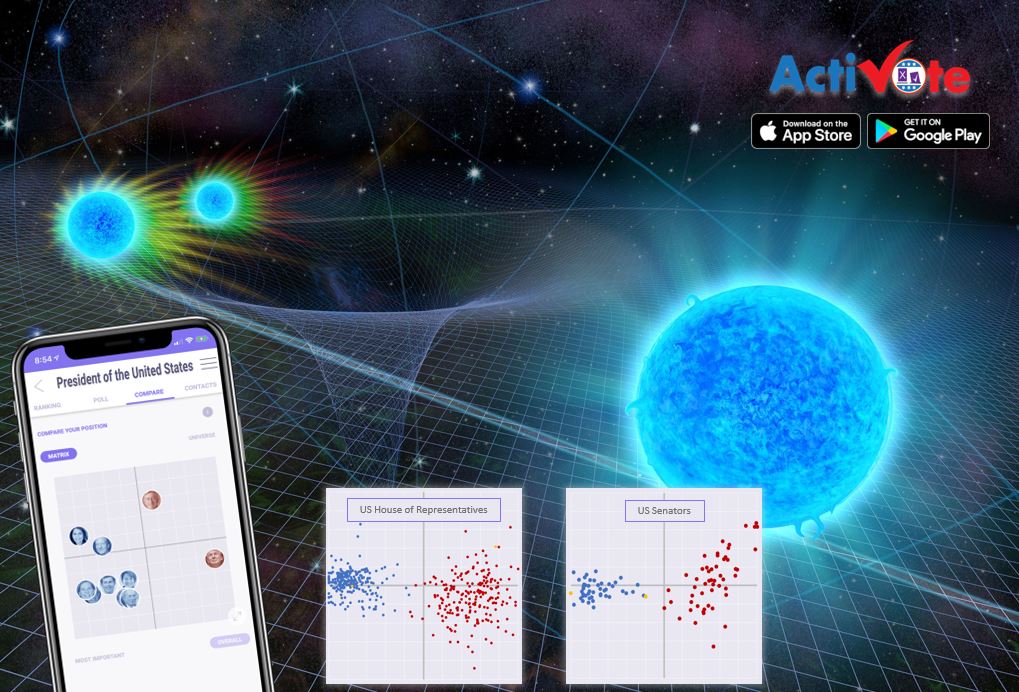 While our early ancestors thought that Earth was the center of the universe, and later thought that at least our sun was that center, today we know that the universe is vast. Earth is just 1 of 8 planets, orbiting a run-of-the-mill star somewhere in the outer reaches of just an ordinary galaxy out of about a trillion galaxies. And, there really isn’t something called “the center of the universe”. Albert Einstein said it best: “everything is relative”, meaning that you can really only speak about a position in relation to other positions, not of an absolute position.

At ActiVote we are taking a page from Einstein’s book although we did first reduce his unbounded 4-dimensional space-time continuum to a 2-dimensional grid with neat boundaries to make it fit nicely on your smartphone. However, just like Einstein’s real-world universe, our political “universe” has no fixed labels to orient yourself on. Instead, it is all about positions relative to others.

We take the answers to the policy questions in our app, and the voting records of federal and state legislators all around the country and feed these millions of data points into our data science political algorithm. What comes out is a position for everyone in the political matrix. Those positions are determined in such a way that those that are closer together in the matrix, are closer aligned in their political values, while those who are farther apart are less aligned. It is all about the relative position.

That relativity is even shown in the movement of people: our algorithm is run every 5 minutes and with new users joining and more questions answered every day, more bills drafted or passed in the legislature, everyone’s position may change (typically slowly, but surely) over time.

The only thing the algorithm knows is that it tries to find those things that divide us most and displays that on the horizontal axis. Then, among those that are placed close on the horizontal axis the algorithm determines which topics differentiate them and that is used to create vertical separation. It is not important whether you are more to the left/right or up/down: all that is important is to determine who is closer to you, versus those who are further away.

We believe that labels can be unnecessarily divisive and polarizing and that is why we omit them. Our matrix isn’t trying to put you in a box or apply a label, but allows you to break out of categories and see who you align with based on actual positions on issues. We hope you’ll give it a try!