Voter Apathy or is it just difficult to cast a vote?

Voter Apathy or is it just difficult to cast a vote? 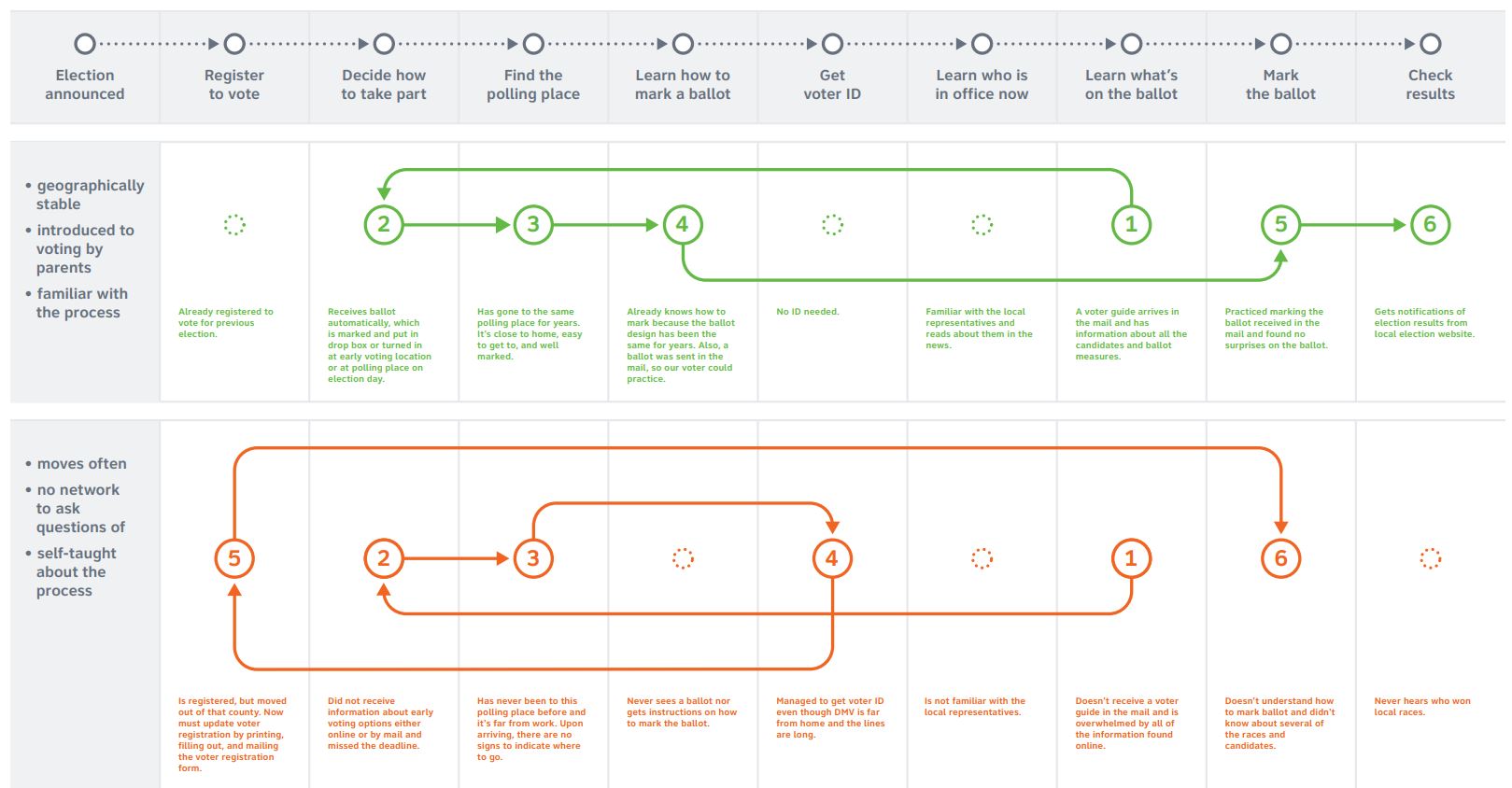 As you may or may not know while America may lead the world in many facets of life, voting is not one of them. Americans are generally not great voters, only 20-65% of Americans vote in a given election. If we look at the 2020 election which had record turnout, the result was still only 66% of eligible voters cast a ballot. Looking at data that the MIT Election Lab captured, the results vary by state. In some states less than ½ of voters cast a vote!

There is a common refrain when talking about the voting rates in America that many voters are apathetic. The rhetoric toggles between people being disgusted about American politics or simply not caring or that their vote doesn’t matter. There may be some truth in this, but we feel that this answer is too easy and that instead the question is what would help people vote?

Let’s start by looking at the voting process. The Center for Civic Design says that “Democracy is a Design Problem” that can be solved. They’ve mapped the flow that a voter has to go through in order to cast their vote. Most of us think it’s pretty easy:

They define the happy path as:

But now let’s look at the path for someone who has moved or had other changes in their life:

“Our research shows that very few people really don’t care. Deep down, almost everyone does care about voting, and they feel shame for not doing it.

The real problem is that voting in America is just hard.

The burdens are costly and the frustration of overcoming them is cumulative. As people weigh the tradeoffs between taking part in a process that is difficult against a possible but unknowable future that they might influence by voting — it’s not that they don’t care. It’s that they are making rational decisions that they may not even be aware of at every step about what they care about right now.”

Other social scientists agree. There is a phenomenon known as the “intention-action gap” or the “social-desirability bias” where if you ask people if they voted, surveys will show that almost 80% of voters will say that they voted. We know actual turnout is far less, so why is that? It is because people wanted to have voted. They do feel it is important and wish that they had. So we agree with the conclusions of the Center for Civic Design and decided to work on solving this problem and increasing turnout.

So we at ActiVote are tackling this problem in the only way we know how – technology. The first is easy access to information and access in one single place. We’ve seen some of the town or county voting websites and they don’t make access to information easy. Our goal is to answer all of the important questions needed to cast your ballot in one personalized democracy experience.

Wondering when your next election is? We’ve got dates over a year out! Wondering how to apply for an absentee ballot? We’ve got you covered. Wondering if you have an adequate voter id? Our partnership with VoteRiders has you covered! Early voting dates? Check! Need to make a plan to vote? We’ll remind you and help you make a voting plan. And of course every election date and the candidates running to represent you.

The next time you hear someone mention voter apathy or the next time you run into someone who isn’t a voter, there are a few simple things you can do to help! The most effective way to get someone to vote is for them to hear from someone they know and trust, and that’s you. Make a note to remind them and help them with their vote plan.

Or the next time someone says “My vote doesn’t matter”, talk to them about why you vote. Asking them what issues they are passionate about as a focus on the impact voting has on daily life is one of the most effective strategies for linking the act of voting to the reason for it.

We are all part of the voter participation challenge. What if every one who reads this votes – but also reminds three people in your circle to vote? And what if those three people did the same thing! Democracy is about people. Voting is about people!