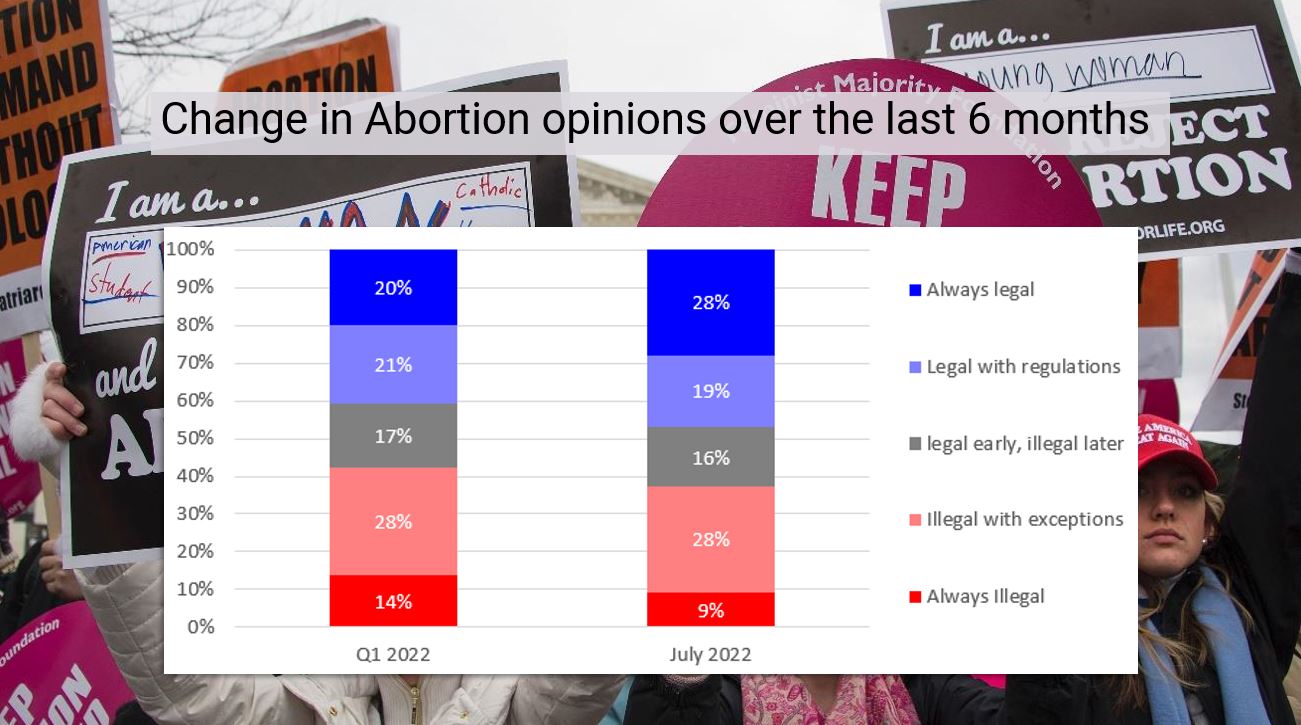 After the landmark Dobbs vs. Jackson (June, 2022) Supreme Court decision to overturn Roe vs. Wade (1973) and Planned Parenthood vs. Casey (1992), it is now up to the states to decide whether abortion is legal in their state. While the dust has not settled on the actions taken by each of the state legislatures, approximately half of the states already have or will enact laws restricting or altogether banning access to abortion, while the other half of the states will or have already enacted laws that ensure that access to abortion remains available.

We wondered whether people’s opinion on abortion had changed in the past month, now that the debate is no longer theoretical, but has real-life consequences in half the country.

ActiVote is in a unique position to answer that question, as we have asked over 22,000 registered voters since June 2019 the following question about Abortion:

Which of the followings statements best reflects your opinion about abortions?

At first glance, on a yearly basis, we see a small increase from 21% to 24% for the “always legal” position, while we see a decrease from 17% to 12% for the “always illegal” position. However, if we look at the combination of (almost) always legal it seems pretty steady at 44% and similarly (almost) always illegal seems pretty steady at 40% as well.

Thus, the often quoted statistic that 60% of the country favors abortion rights at least up to a point in the pregnancy (reflected in the 3 options in blue, light blue and grey) and 40% opposes (almost) all abortions is confirmed by our polling over the past few years.

However, if we zoom in on the last six months, we see a significant shift. In all the following graphs we will compare 1364 answers from Jan-Mar 2022 with 1387 answers we received in July 2022. All samples have been weighted to correctly reflect all registered voters.

In the time since the Supreme Court released its Dobbs decision (June 24th, 2022), support for the always legal position has jumped from 20% in Q1  to 28% in July. Also, support for always illegal has been significantly reduced from 14% to just 9%. The question is now who the people are that are changing their minds.

The first significant observation is that men are getting more aligned with women. In Q1, 52% of men thought abortions should be (almost) always illegal, a percentage that had dropped to just 39% in July, bringing them much closer to women, of whom just 35% hold that opinion.

Support for legal abortion among Democrats did not change much, although there was a significant shift from “legal with regulations” to “always legal”. Only 17% of Democrats believe that abortion should be (almost) always illegal.

The biggest change was seen among Independents, where support for (almost) always illegal dropped from 47% to 35%, making them somewhat more aligned with the Democratic than the Republican position.

Despite the meaningful change towards more support for abortion rights, the overarching picture remains that the country is deeply divided on the topic, with a signficant majority of Republicans (67% in July) believing that it should be (almost) always illegal, while an increasing majority of Democrats (83%) oppose that position. Thus, it is to be expected that in red states restrictive laws will continue to be enacted post-Roe, while in blue states pro-choice laws will be enacted.

Abortion rights supporters can take away from this poll that there are meaningful movements in two groups of people: men are aligning their views more with women, and independents have moved more than any other group towards supporting at least some abortion rights, which could have an impact on upcoming elections, if abortion were on the ballot.

Finally, there seems to be a near-universal rejection, even among 80%+ Republicans, of making abortion always illegal and not allowing for any exceptions. Therefore, it would not be surprising if laws which have banned abortion under all circumstances, will be short-lived, as they are not supported by any significant constituency.

Want to add your voice to our poll? We’d love to hear your thoughts on the Abortion Debate as well as State Laws on Abortion, Planned Parenthood and the Hyde Amendment.

See here for details on how ActiVote conducts its polls.