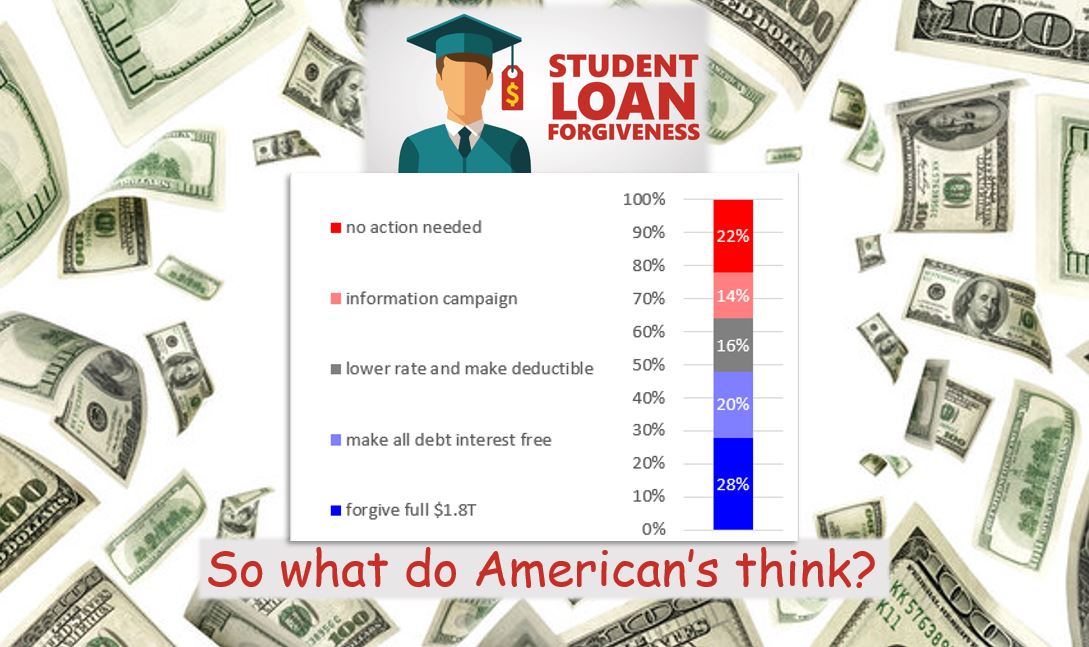 On August 24th, 2022 President Joe Biden announced his plan to forgive about $500 billion of the total almost $1.8 trillion in student debt held by some 43 million borrowers. For the average borrower it means a reduction in their debt of $10,000 or $20,000, depending on various rules, where eligibility is focused on those with lower incomes.

The biggest question remaining is whether this announcement by the Executive Branch will pass muster with the Supreme Court as it is Congress that has the power of the purse and $500B is a lot of money: about 10% of what the Federal Government spends in a year and in the same ballpark as we pay on all of Medicaid (just over $600B), on Medicare (also over $600B). While we await the various court challenges that undoubtedly will be filed to see if the Executive action is legal, we took a look at what the US electorate thinks about Student Loan Debt Relief in general.

During 2021 and 2022, we asked 5000 registered voters the following question about student loan debt relief:

Which of the following statements best reflects your opinion on the student debt crisis?

The plan announced by Biden falls somewhere between the 1st (full relief) and 2nd answer (interest free). The 3rd answer (lower interest rates), 4th answer (warning about taking on student debt) and the 5th answer (just repay like any other loan) all leave the debt intact.

Overall, it seems that we are divided on what to do. Just over ¼ of respondents believe that we should forgive all debt, while just under ¼ of respondents believe no action is needed at all. Also, the two actions that seem closest to the President’s plan, one that forgives all debt and the other that makes all debt interest free, together garner only the support of about half the electorate (48%).

The question is: who are the people who support debt relief, and who oppose it?

There is a surprisingly large gender gap in the answers, with women much more supportive for action on student debt than men. Women hold 58% of all student debt according to educationdata.org, which could explain some of this difference in opinion.

We found a clear relationship between age group and support for student debt relief: younger generations who are most likely to be personally affected more strongly support a form of relief, while the oldest generation (who went to college in smaller numbers, paid less for tuition and likely have paid off any debts they would have had by now) are less supportive.

We found a very strong relationship between ethnicity and support for the plan. Especially Black voters support some form of debt relief. The same holds to a lesser extent for Latinos. According to educationdata.org, Black college graduates have on average $25,000 more in student debt than their White peers, related to the fact that Black families have on average fewer resources to pay for college.

Another strong relationship was found regarding income: those with a lower income (who are more likely to struggle with student loan payments) are more supportive of debt relief. 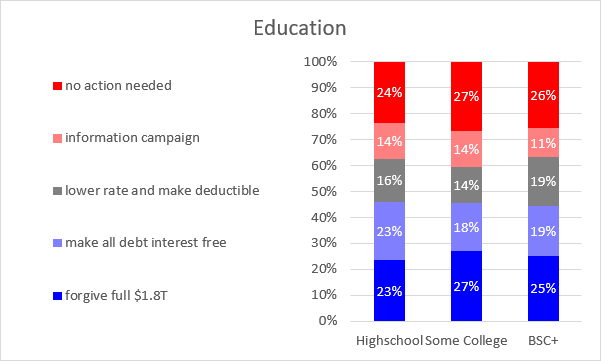 Surprisingly, we did not find any discernible differences based on education level.

Finally, there is a clear difference between Democrats and Republicans on this topic. While 71% of Democrats favor taking significant action (full debt relief, or at least making it interest free), only 25% of Republicans agree and 58% of Republicans favor not changing anything to the loan conditions. Independents are between those two, but lean a bit closer to the Republican position than the Democratic position.

In summary, student debt relief could be a divisive issue which is strongly supported by some, and strongly opposed by others.

There already wasn’t a shortage of topics to talk about during the Midterm election campaigns, with Inflation and Abortion topping the lists. We expect that Student Debt Relief will join that list. If anything, voters will have some clear choices in November: voting on topics that clearly matter to them. And that is good news. Isn’t that what Democracy should be about?

See here for details on how ActiVote conducts its polls.