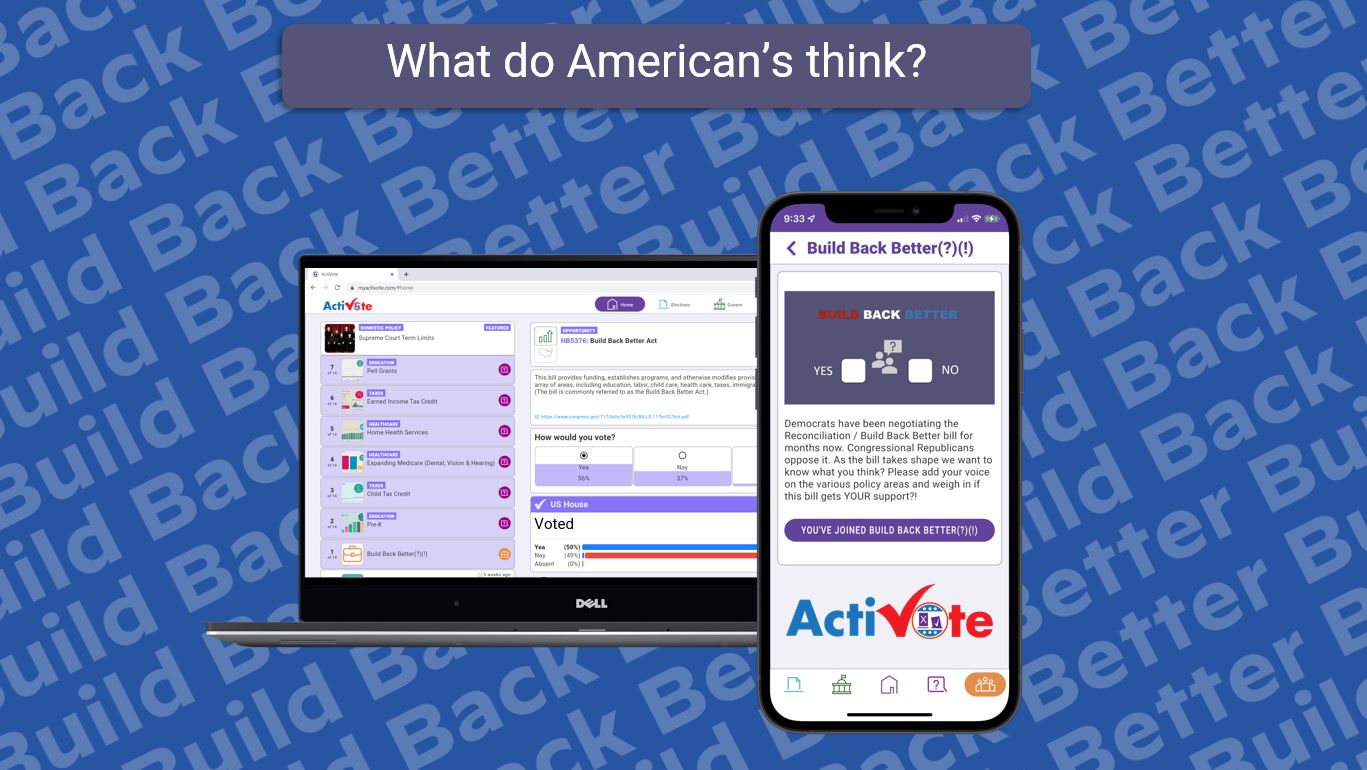 As part of the Build Back Better event, run in the ActiVote app from November 3rd -November 17th, 2021, a poll on 11 topics and 2 bills was executed.

The two bills were H.R. 5376 “Build Back Better Act” and SCR 14, the “Reconciliation Bill”. Each bill consisted of title, summary description, link to the full bill text, and the votes cast by a participant’s representatives as well as the overall votes cast in Congress. The three choices available to users were “Yea”, “Nay” and “Unsure”.

In this chapter we are presenting the polling results per topic.

There is majority support (58%) for extending Kindergarten to include children of age 4. A large minority of 44% wants to include also children who are 3 years old.

Pre-K is a somewhat partisan issue with 75% of Democrats favoring extending it including 64% who want to include the 3-year-olds.  There are more Republicans (49%) who favor not extending Kindergarten than those who do (38%).

A small majority of 56% of voters believes that the current child tax credit value (or more) is the right solution. Only 10% believe there should be no Child Tax Credit at all.

Interestingly, the child tax credit is a very bipartisan issue, with 44% of Democrats and 38% of Republicans supporting the current levels or more, although there are more Republicans who wish to abolish it or go back to pre-Trump era levels (40%) than Democrats (29%). Independents are the strongest supports with a clear majority of 68% supporting current or higher levels.

A significant majority of 70% believe that Medicare should be expanded with at least dental, vision and hearing.

There are some clear partisan differences on this topic: Democrats (73%) and Independents (80%) favor expanding Medicare fully with dental, vision and hearing. Republicans are split on the issue with 39% for doing nothing (or even reducing benefits) and another 39% believes in fully expanding Medicare.

A majority of 71% believes that we should increase funding for Home Health Services, either on a means-tested basis or for everyone over 65. Only 13% wish to decrease funding.

Almost all Democrats (86%) support expanding Home Health Services funding, while significant majorities of Republicans (63%) and Independents (61%) agree with them.

A significant majority (75%) believes that the Earned Income Tax Credit should be increased, with only 16% believing it should be reduced or abolished.

Nearly all Democrats (93%) wish to increase the EITC, 77% of Independents feel the same. There is also a slim majority among Republicans of 53%.

A majority of 63% believes that Pell Grants should be expanded to more people, while only 18% wish to reduce their availability, or abolish them completely.

Democrats (73%) and Independents (62%) in majority favor increasing Pell Grant availability. Republicans are less enthusiastic, with only 41% supporting extending them. However, Republicans still view Pell Grants favorably, with only 26% supporting reduction or abolishing them.

A small majority of 54% wishes to increase funding for this program, while 37% wish to reduce or cancel it.

Most Democrats (74%) would like to increase funding for Section 8 Housing Vouchers. Independents increase in majority (58%) as well. There is strong opposition from Republicans, where 68% wish to reduce funding for the program.

A large majority of 76% would like to extend solar tax credits for at least another 10 years.

There are majorities for the extension of Solar Tax Credits by at least 10 years among all parties: Democrats (89%), Independents (72%) and Republicans (60%).

Only 49% of voters would like to heavily invest in rural development. The other half would like to either promote it, leave it to the market, or just does not believe that there is a problem to be solved.

Democrats are most supportive of heavily investing in rural development (58%), followed by Republicans (46%). Only 35% of Independents support this. If we include those who believe in supporting investment, the support increases to resp. 92% (D), 69% (R) and 73% (I).

There is little partisan divide on this topic: 56% of Republicans, 60% of Independents and 73% of Democrats believe that we should do (much) more to close the tax gap.

A small majority of 57% thinks that there should be a Global Minimum Tax at least for all developed countries. A sizeable group of 38% thinks that the current situation with disparate tax rates is fine, or that further competition between countries should be allowed.

There is a clear partisan divide with 64% of Republicans wanting to see the current or more competition on Tax Rates, while 70% of Democrats would like to see Global Minimum Tax enforced, at least for developed countries. Independents side with the Democrats on this topic.

Overall, the Democratic reconciliation bill is somewhat popular among the electorate with 52% for, and 38% voting against, with 1 in 10 people unsure about it.

Democrats strongly support the bill, Republican strongly oppose it, and Independents are evenly split on it.

Slightly higher support for this version of the bill than the original bill going through the senate, with 58% for and 34% against.

The partisan divide on this bill is again very clear: 93% of Democrats are for and 72% of Republicans are against. Independents are supportive of the bill with 58% for and 32% against.

Although there is always the possibility to misread the motivations of survey participants from the multiple-choice answers given by them, we do believe it is useful to seek the overarching narrative that can be read from a set of related survey questions. We try to formulate one possible narrative in this section.

There is overall majority support for all measures presented in this poll, each of which is a part of the Build Back Better Act, with as only exception “Rural Development”, where only 49% supports significant investments.

In all cases, even if majorities of all major groups polled (Democrats, Republicans, and Independents) supported an investment, the support among Democrats was the strongest and support among Republicans the weakest.

Overall, with Democrats in majority supporting every measure in the bill and Republican majorities available for less than half of the measures, it is to be expected that there will be little to no support for these bills from Republicans in Congress. If we then add the politics of the situation, it is likely that not a single Republican in Congress will support these bills.

Please join in for our future surveys!