Power of One Vote

Power of One Vote 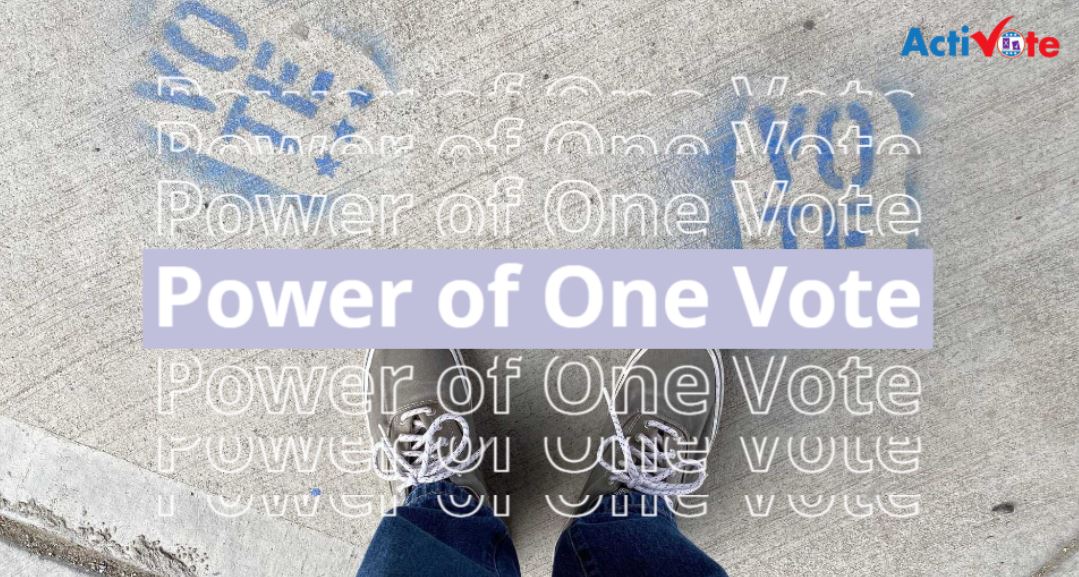 We’ve all heard the message “Every Vote Counts” or “Your Vote Matters”. Still, many people don’t believe it and think that their vote doesn’t really make a difference. If that sounds familiar, please watch this video. By the end of this text, you just may have changed your mind.

In 2019 I had just moved to Boston and was voting in my first local City Council election. I went to forums and candidate events to make sure I knew who shared my values. In Boston you vote for a district councilor and then vote for your top four choices for the four at-large city-wide seats. That year there were over 40 folks running for city council – so the choice was a difficult one. I cast my ballot with pride and then sat back waiting for the results.

On election night the 4th and 5th place finishers in the at-large race were so close it went to a recount. Weeks later and after thousands of volunteer hours of people hand recounting every ballot, Julia Mejia won that seat by ONE single vote. 22,492-22,491. That is tens of thousands of people who know that their vote mattered and I was one of them! I had voted in that election, so it felt like I had personally swayed the outcome!

But this race wasn’t an anomaly. In 2002 an election in Esmeralda County Nevada was tied 107-107. First – this should tell you that turnout is indeed a challenge when only 214 people voted! And it should also tell you that any person’s vote in that election would make a big difference. Now, pretty on brand for Nevada, this election was decided by drawing cards. R.J. Gillum drew a Jack of Spades and Dee Honeycutt drew a Jack of Diamonds. Per the rules, spades beat diamonds and Gillum won the election.

In 2009 in Cave Creek Arizona, after a 660 vote tie Adam Trenk won a seat on the town council by cutting a deck of cards. A king of hearts to beat Thomas McGuire’s 6 of hearts.

And this is not only local elections. In 2000 George W Bush won the presidency by 537 votes in the state of Florida. While it isn’t one single vote, over 6 million Florida residents voted in that election and every single one mattered for the entire country.

You might think these stories are few and far between and while it’s true many elections are decided by more than a single vote. But what this does tell us is that participation in these local elections makes all the difference in the world. Each and every one of you reading this can make a difference to your community by casting a ballot in these elections.

All it takes is knowing when each of your elections are (we’re here to help!), being confident about which candidates share your values (we show that too!) and knowing how to cast that ballot (we’ll remind you of all key dates & deadlines).

The first step to being a regular voter is knowing when your elections are. This year your state will have a primary for congressional seats and likely other races and then a general in November. But local & special elections happen throughout the year in communities across the country. The first thing we do is ensure that you have a complete election calendar of every opportunity you can vote! The next question a voter will ask is about who to vote for. We do not advocate for a party or any candidate but we will ensure you can see the candidates in each of these elections. When it feels overwhelming to figure out which candidate deserves your support, this is where our political matrix comes in. You learn about policy, express your opinion and our advanced data science creates your political profile. You can then compare your overlap with many of the candidates that you can vote for (we have the political matrix position of tens of thousands of candidates nationwide). Lastly it is important for each and every voter to know HOW to vote. We will flag each important deadline in the process and provide you easy information about the rules. Are you eligible to vote absentee? If so, how do you apply? If you are voting by mail, how do you cast that ballot? When is early voting in your state? Where is your polling place? We will make sure you have the tools to confidently cast your ballot! All of this in one place: your personal democracy app (on your phone, tablet or desktop) for every election.

Just think: if your vote matters this much, what would happen if you asked three of your friends, family, colleagues or customers to cast their vote? What if everyone in your department all committed to casting ballots in the upcoming primary election in your state? What if your company decided to point all its employees, partners and customers to this free resource to help everyone confidently vote in their elections?

Just as the small action of voting yourself matters, you can multiply that impact by encouraging those closest to you to do the same. Research shows that the most effective way to get voters to the polls is to hear from someone they know & respect. For family, friends and colleagues – that’s YOU!

We encourage all of you reading this to Be a Voter! Give ActiVote a try and encourage your family, friends, colleagues & customers to do the same!