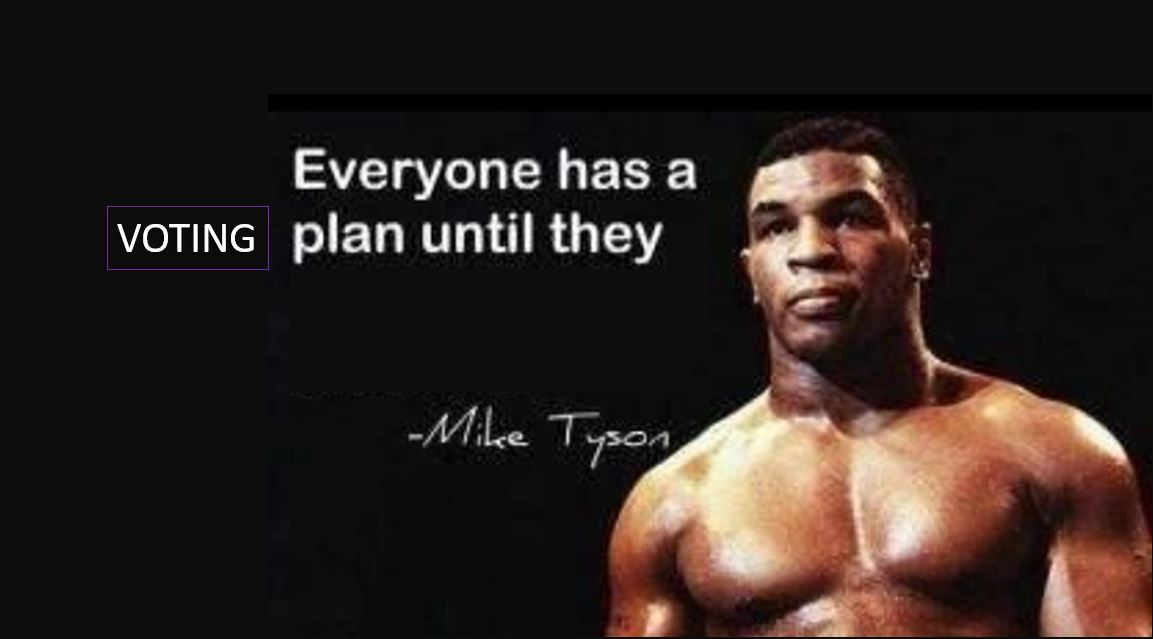 Former heavyweight boxing World Champion Mike Tyson famously said: “Everyone has a plan: until they get punched in the face”. We were wondering whether his words also apply to voting. First, we wondered whether people actually have a plan (to vote). Second, how often do these plans get derailed?

ActiVote helps our users plan their vote by asking questions at each step of the voting process, from the moment an absentee ballot can be requested, the absentee ballot should be mailed in, early voting starts and ends, 1 week before the election and finally the day before the election. We have analyzed whether people ended up following the plans that they laid out and we have tried to determine what the equivalent of “getting punched in the face” is in terms of voting.

Please note that users of ActiVote are more likely to vote than the general population as they have already taken the step of using a voting app to help them vote, setting them apart from the average voter. As a comparison, of all registered voters, 75% voted in the 2020 election, while of all eligible voters, about 66% voted.

Let’s start with the earliest an election gets on people’s radar: when they could request an absentee or vote-by-mail ballot. On average 31 days before the election date users answered the question on whether they were going to vote absentee, in person or not at all.

The next “voting plan” moment was on average 22 days before the election when we asked users whether they had already sent in their absentee/vote-by-mail ballot.

Of those who answered the question 44% said that they were not voting by mail and 93% of them ended up ultimately voting (early or on election day). Of the 24% of people who said they had already submitted their ballot, 94% ended up actually voting. Of the 32% of people who said they were voting by mail, but had not yet come around to submitting their ballot, only 85% ended up voting. Here the first sign of a “lack of planning” seems to become visible: while there was still some time 3 weeks before the election, the window for sending in ballots was slowly closing. Of those who were waiting, some ended up missing the deadline or forgetting all about it. Those who were not planning to vote absentee did much better, almost as well as those who already voted absentee or by mail.

At the start of the early voting period (on average 18 days before the election for our users), we asked our users the next question, differentiating between absentee/vote-by-mail, early voting or voting on election day.

About 1/3 of our users indicated that they had already voted (and 95% of them ultimately did). About half of our users were planning to vote early, and 90% would ultimately end up voting, while of the almost 1/5 who planned to vote on election day only 86% ultimately voted.

Thus, we see that those who had taken the earliest opportunity were most successful in following through and those who planned to go early were more likely to actually follow through than those who would wait until the last possible day.

Just before the end of the early voting period (on average just 4 days before the election for our users), we asked them the same question again.

By now, half our users indicated that they had already voted (and 95% indeed would end up voting). About 1/4 said they would vote early, but only 74% of them would succeed in voting at all, while those who planned for election day would be a bit more successful with 81% ultimately voting. The explanation here seems to be that people who intended to vote early, while the clock had almost run out on early voting, might not really have planned when exactly to go, and were more likely to never make it to the polls. Those who at least planned, somewhat more realistically, to go on election day, were more likely to do so, given that half the country would do the same thing.

While the early voting question only applied to those users in states with early voting, we asked every user 7 days before election day, what their plan was.

About 1/3 indicated that they had already voted and in 98% of the cases they ended up voting. Then, there was still 1/6 who planned to vote early and many (91%) did make it to the polls. A little more than ⅓ was planning to vote on election day and 80% of them did make it there. About 1 in 7 was still going to drop off their absentee or mail-in ballot. With time running out, only 77% were successful. Finally, a small percentage planned not to vote. Of those 1/3 did show up after all. There seems to be again a link to how feasible a plan seems with the percentage of people that ended up voting.

Finally, the day before the election we asked people what their plan was, with a choice between “already voted”, “will vote tomorrow” or “won’t vote”.

More than half of our users said they had already voted, although only 89% of those who said that ultimately had their vote registered. The high rate of discrepancy makes us wonder whether some people realized that for them it was too late, but did not want to admit that to themselves or the app. Of those who planned to vote the next day (just less than half), 85% actually voted. Finally, of those who said they would not vote, none did. Clearly, with just 24-hours to go, they had made up their minds.

In our 7-day and 1-day questions, we asked more about how people were going to vote. The first question was about whether they would go alone, or with others.

About 7 in 10 indicated that they would go in the morning or the evening. They ended up voting in just over 80% of cases. Those picking lunch or the afternoon had a higher chance of making it to the polls. We can imagine that those picking morning or evening might have to get to work and either would run out of time in the morning, or come home late and running out of time. Those who were able to plan to do it during lunch or the afternoon probably did not have such restrictions allowing them to follow through more often.

Finally, we asked people 7-days and 1-day before the election whether they knew where their polling location was.

Almost 8 out of 9 knew where to go, and 89% of those would also end up voting. For the 1 in 9 who did not know where their polling location was, only just over 1/3 would make it there. Clearly, not knowing where to go can be a huge obstacle to actually voting.

Overall, the group of ActiVote users who participated in our voting-plan questions tended to have significantly higher turnout than other registered users. Still a pattern does emerge that shows those planning to use the earliest opportunity, whether it is mailing in a ballot early, or voting early are more likely to succeed. For those voting on election day itself, it seems that those who have limited opportunity during the day are more likely to miss out. Also, going together with 1 or 2 others has a benefit over going alone. Not knowing where to go was the biggest reason for not making it to the polls.

If we would want to summarize all of this in a simple, Tyson-like quote, it should probably be something like: “Everyone has a voting plan: until they run out of time or don’t know where to go”.