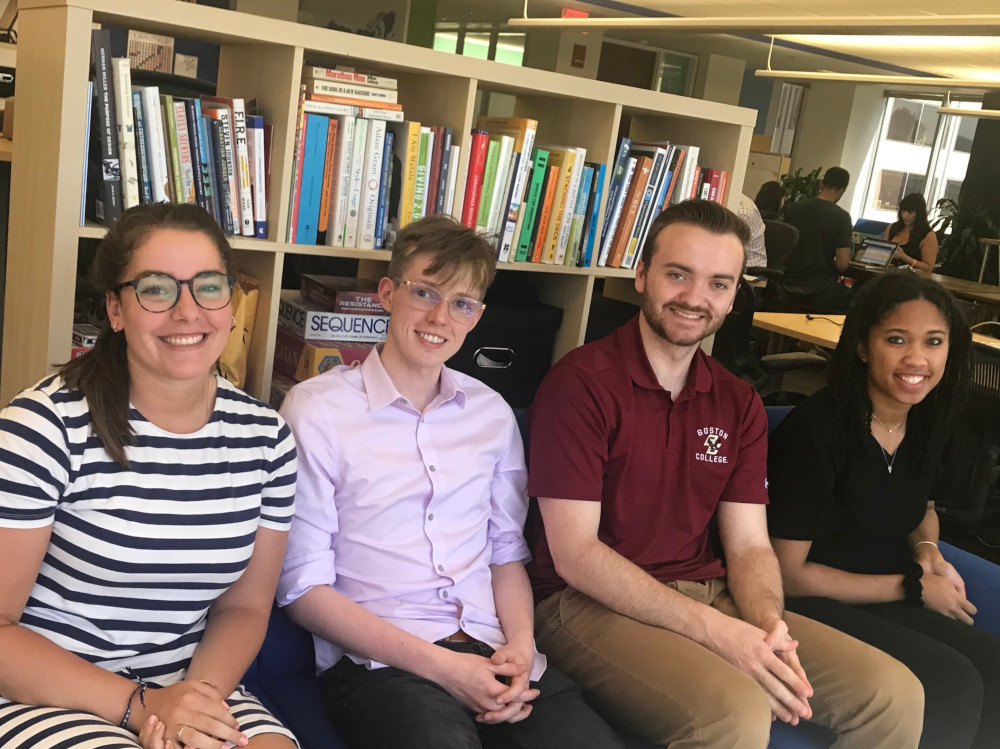 Today marks the second week of ActiVote’s internship program. Last Monday, we all met for the first time. After a short introductory period, we quickly developed a good rapport, and not long thereafter, kicked our project off for the summer. Our first major task was to hunt for bugs — to explore every nook and cranny of the app, to make sure every function worked. As we jotted down various notes on the app’s performance, we began to realize just how special our team was—all coming from different towns, attending three different universities, and studying with different focuses, our collective brainstorming power was a force to be reckoned with.

My name is Ronan, I come from Milton, Massachusetts, and I have been interested in politics since I was about fourteen. Now, eight years later, I study marketing in school, with a fair bit of political study thrown into the mix. To be given an opportunity to work in a capacity that allows me to apply everything I’ve learned from both fields simultaneously is a task as complex as it is rewarding. If we as Americans hope to address the problem of democratic participation (or lack thereof), I firmly believe that the solution starts with millennials, as the world is becoming more and more digital, and our political institutions should follow suit. As of right now, the question I am asking myself over and over again, is: How are we going to bridge the gap between the “old guard” of American politics, and the increasingly younger electorate, which is seeing itself mirrored in the candidates that represent them less and less?

I’m Brendan, and I am from Weston Massachusetts. In the past few years of my life, my interest in politics and the health of our democracy has grown exponentially. I study philosophy and political science at Boston College. Through my course of study, I have had the privilege to familiarize myself not only with our current political climate, but also with the thinkers and the texts which inform our politics. This has led me to become more passionate about politics as I continue to find links between our politics and theory. I feel that it is important to understand what our political system is built upon in order to help fix it—and with that, I simply hope that I can do my part to help our democracy heal.

I’m Nicole, and I’m from New Canaan, Connecticut. I’ve always been interested in politics, but I have to credit my AP Gov teacher from my senior year of high school for giving me the opportunity to realize that this was what I was truly passionate about. Since then, my enthusiasm has only grown as I’ve pursued a degree in Political Science and Marketing at Boston College. I find this internship to be a perfect blend between my social science and business classes, especially since we’re given such a hands-on role within ActiVote. Because “politics” in America has such a connotation of being something so abstract and “other”, it can be difficult to try to understand politics because it can seem like a herculean task. Through this internship and this app, I feel that I’m doing my part to make politics more accessible to the average American so that people can become more involved in our democracy.

I’m Allegra, and I’m from Newton, Massachusetts. Growing up, politics and civic engagement were major components of my life. In high school I shifted my focus globally, thanks to the help of two transformative social studies/government classes during senior year. Currently, I am continuing to pursue my interests at the University of Miami, double majoring in International Studies and French, with a minor in Women and Gender Studies. This internship allows me to dive deeper into domestic politics, as well as hone my knowledge of foreign policy. The hands-on experience and noble cause of ActiVote makes me so excited to help our democracy throughout the rest of the summer.