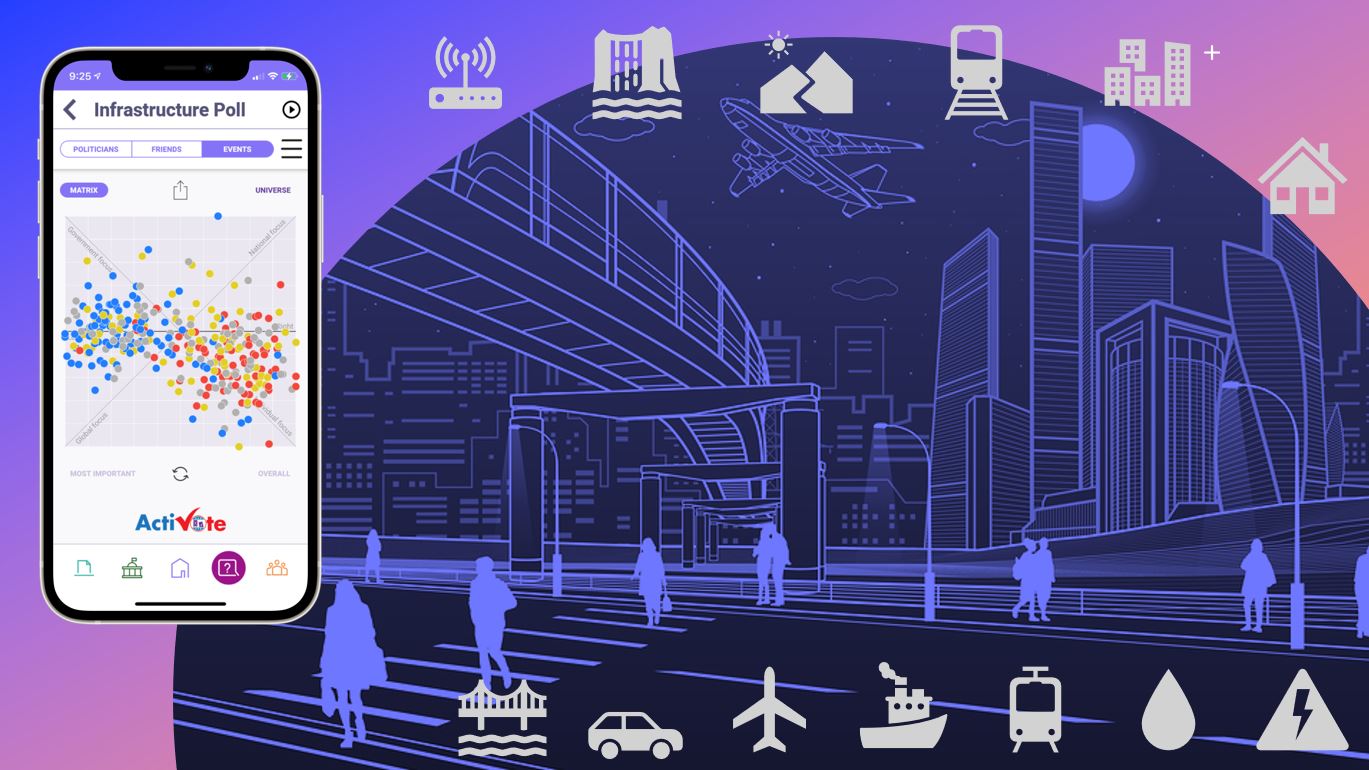 As part of the Infrastructure Week ActiVote event, run in the ActiVote app from August 31st-September 16th, 2021, a poll on 11 topics, 2 bills, and 1 procedure question was executed.

The two bills were H.R. 3684 “INVEST in America Act” and SCR 14, the “$3.5T Reconciliation Bill”. Each bill consisted of title, summary description, link to the full bill text, and the votes cast by a participant’s representatives as well as the overall votes cast in Congress. The three choices available to users were “Yea”, “Nay” and “Unsure”.

The procedure question asked in how far representatives were expected to vote their conscience on these bills.

The total number of answers included in this poll is 19,924, averaging a response rate of 1423 per poll.

In this chapter we are presenting the polling results per topic

There is significant majority support (70%) for extra investments in cyber security, with minimal support (10%) for doing less on cyber security than we are doing today.

Cyber Security is a very much bipartisan issue with 79% of Democrats, 72% of Republicans and 67% of Independents supporting additional investments.

Disaster Relief is a very bipartisan issue with 78% of Democrats, 74% of independents and 68% of Republicans supporting providing significant aid to states if and when they need it.

There are some clear partisan differences on this topic: Democrats (80%) and Independents (82%) favor encouraging Electric Vehicles, while only a small majority of Republicans (54%) feel the same way. Republican’s largest subgroup (43%) consists of those who wish to leave it to the market.

A majority (78%) believes that the federal government should at least upgrade all lead pipes on public property. A majority of 65% wishes to go further and have the government help upgrade private property owners who cannot afford it themselves.

The partisan split on this topic is limited: 83% of Democrats supports upgrading all lead pipes on public property, along with 84% of Independents and 65% of Republicans. There is majority support for upgrading lead pipes for private property owners who cannot afford it from Democrats (76%) and Independents (59%) but support falls just short of a majority among Republicans (48%)

A small majority of (56%) believes that the government should make funds available to cleanup legacy pollution sites. The minority believes that cleanup should be linked to whether the polluters can be made to pay (26%), or should proceed, but not as a priority (17%).

Democrats (68%) and Independents (67%) in majority favor significant funding for cleaning up legacy pollution sites. Republicans not so much: about 1/3 favors such funding, another 1/3 wishes to make cleanup dependent on whether the polluters pay, and the final 1/3 does not see it as a priority.

As majority of 58% wishes to provide additional funding for our ports, while 32% wishes that ports become less dependent on the federal government or even privatize all ports.

Most Democrats (80%) would like to increase the funding for ports. Only a minority of Independents (45%) and Republicans (43%) agree. Similar numbers of them would like to ports be less dependent on the federal government.

A large majority of 90% would like to see investments to reduce the vulnerability of the power grid.

Democrats (93%), Independents (90%) and Republicans (88%) are in complete agreement regarding the necessity to address the vulnerability of the power grid.

A large majority of 77% believes that additional money should go to shore up our roads and bridges and 2 out of 3 voters believe that roads & bridges are due a major investment.

There is little partisan divide on this topic: 80% of Democrats, 72% of independents and 56% of republicans support a major investment. If we include those who support at least additional money to all roads and bridges safe, these numbers increase by about 10%.

Want to read more about American’s opinions on roads & bridges. Check out our previous analysis here.

The country is divided on what to do about Universal Broadband Access. On the opposite sides of the spectrum, 30% believes that the government should create a national internet, while 26% believe that it should be left completely to private business. Among the other options, 19% believe loans and grants from the FCC are the way to go to stimulate the creation of broadband access. Another 14% believes that it should be left to local municipalities. A final 10% thinks that the government should provide at least internet access at libraries and government buildings.

There is a clear partisan divide, but even among Democrats there is only a minority for a major government undertaking to provide a nationwide internet, something supported by only 29% of independents and 24% of Republicans. Loans and grants from the FCC are more popular with Democrats (25%) and Independents (23%) than Republicans (23%). A plurality of Republicans (37%) would like to just leave it to private businesses.

Want to read more about American’s opinions on universal broadband, check out our previous analysis here.

Democrats are almost unanimous (88%) in their support for the bill with only 11% against. Independents are also clearly supportive of the bill (69% vs. 16%). While 30% of Republicans support the bill, a 55% majority is against.

The partisan divide on this bill is very clear: 85% of Democrats are for, and 11% against, while for Republicans it is the other way around: 82% is against, with only 10% for. Independents are almost evenly divided with 44% for and 41% against.

Representatives Approach to Voting on Both Bills

A majority of all voters (56%) believe that their representatives should just vote their conscience on both bills. Another 16% feels that you can use your vote as leverage, but ultimately should still vote your conscience. There is little support for gamesmanship leading to voting against a bill that a representative supports.

Independents are most clear about expecting their representatives to vote their conscience: 87% would like to see that, allowing for using some leverage before ultimately voting. Republicans are closely behind with 79% sharing this opinion. While a (much smaller) majority of Democrats (59%) feel the same way, 33% believe that it is okay to vote against a bill you support to make a point.

Curious with how this aligns with Americans thoughts on bipartisanship? Check out our previous analysis here.

Although there is always the possibility to misread the motivations of survey participants from the multiple-choice answers given by them, we do believe it is useful to seek the overarching narrative that can be read from a set of related survey questions. We try to formulate one possible narrative in this section.

There is also majority support for some investment in other categories, such as Electric Vehicles, High-Speed Rail, Lead Pipe replacement, Legacy Pollution Cleanup. For these categories, however, a majority rejects the most far-reaching proposals.

The only outlier is Universal Broadband Access, where only about half of voters believed that a federal government investment is needed.

In almost all cases, even if majorities of all major groups polled (Democrats, Republicans, and Independents) supported an investment, the support among Democrats was the strongest and support among Republicans the weakest.

Ultimately, when it comes to H.R. 3684, a clear majority of Democrats and Independents support it, as well as a significant minority of Republicans, which seems to align with opinions about the individual elements in the bill. It seems that the Senate vote (all 50 Democrats and 19 out of 50 Republicans) are approximately aligned with the sentiments of their constituents.

For SCR14 the situation is very different. Democrats are strongly supportive, Republicans are strongly against, and Independents are evenly divided. This may be related to the fact that there is much less clarity about what is in it and calling it an “infrastructure bill” is by many seen as a liberal usage of the word infrastructure. There has been lots of talk about these two bills and whether they should be linked, which bill should be voted on first, whether progressive Democrats will support the INVEST in America Act, whether any House Republicans will support that same bill, and whether moderate Democrats will support the reconciliation bill. Their constituents are clear about what they want: their representatives should less focus on playing games, and more on voting their conscience.

We would love you to add your voice to our next survey!