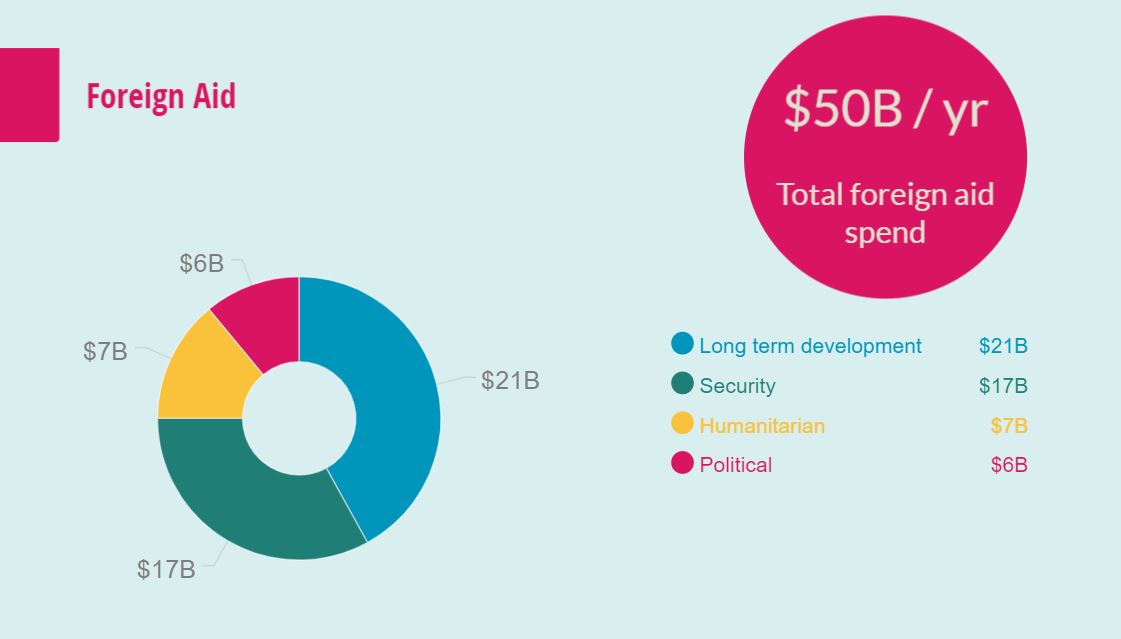 During President Biden’s trip to Europe for meetings with the G7, NATO and of course the visit with Queen Elizabeth, he announced that the US will buy 500 million doses of Pfizer’s COVID-19 vaccine to donate to countries which need the vaccine but cannot afford it.

Although it was not released what the exact cost for the US would be, in initial deals the US paid $19.50/dose to Pfizer. At that price, the generosity of the US may cost about $10 billion, which is significant as the total value of our yearly foreign aid is around $40 billion.

This raises the question whether US voters are in favor of significantly increasing how much we spend on foreign aid in general. So, we asked our users how much they think we should spend on foreign aid. We informed them that right now we spend about 1% of our annual budget, down from about 2% a few decades ago. Our users then had to choose from the following answers:

We received over 4400 responses that showed there is no consensus on what the right level of foreign aid is, but not showing much appetite for a significant increase.

There is a clear “education gap”, where those with the highest education have a slightly higher preference for increasing the level of aid (39%), than for decreasing it (35%). All others have little appetite (less than 1 in 4) for increasing our levels of aid.

It is clear that overall, the country is not all that enthusiastic about foreign aid, and more people would like to see it reduced then increased. As we suspect the Biden Administration has good insight on what the public thinks, we can only speculate on why he has decided to make a vaccine announcement that seems to go against popular opinion?

Maybe he hopes that “donating 500 million vaccines” is not equated with “a significant increase in Foreign Aid” and the public will think more positively about this particular specific form of aid. Or, he realizes that while it may not have bipartisan support, members of the Democratic party are mostly okay with it.

Both of these calculations could be true, but maybe the answer is simpler. Maybe Joe Biden has decided that this is less about politics and more about the world-wide humanitarian challenge of a pandemic: people are dying and we can help, so we should.

Maybe, sometimes politics is that simple?