So what’s in HR.1, the “For the People Act” on Democracy Reform?

So what’s in HR.1, the “For the People Act” on Democracy Reform? 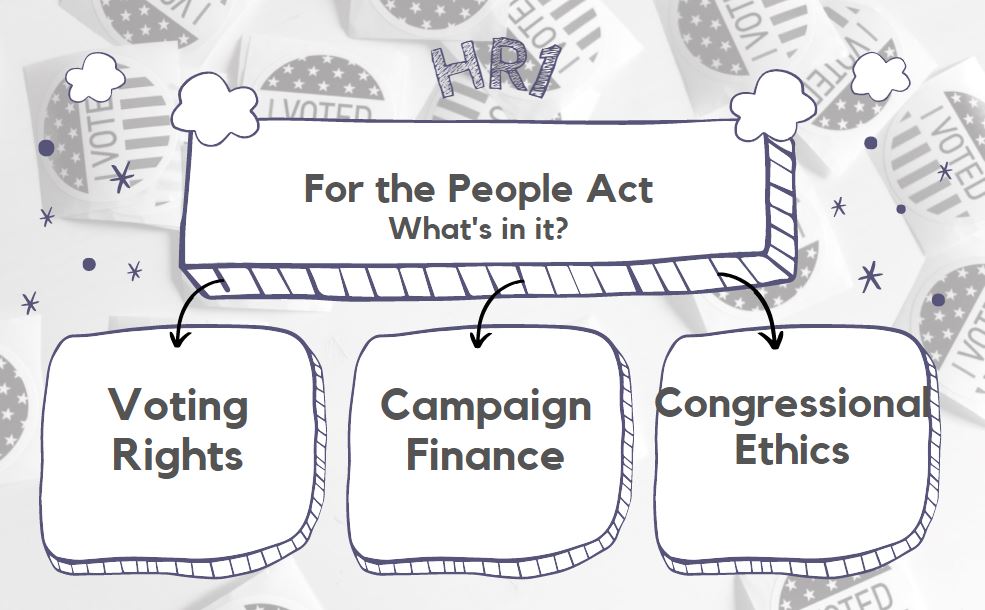 Voter turnout in 2020 was 66% of all eligible voters: higher than ever in our history and significantly higher than the 60% who showed up in 2016 or even the 62% in 2008. Many people point to the expanded voting options due to the pandemic as one of the reasons for that increase.

The House Bill HR.1 and its Senate counterpart S.1, named the  “For the People Act” is designed to support democracy reform and anti-corruption legislation to keep voters engaged and participating in our democracy at record levels.

Let’s see what is in it!

While Congress is focused on the For the People Act, state legislatures across the country are taking action to change voting laws as well. Some states focus on election security with 106 bills generally seen as restricting voting options filed in 28 states. Other states focus on making voting more accessible with 406 bills filed in 35 states.

The federal and state actions have led to a discussion about the constitutionality of it all: is Congress in charge of voting laws, or should states be able to make their own decisions?

The Elections Clause (Article I, section 4) of the constitution reads: “The Times, Places and Manner of holding Elections for Senators and Representatives, shall be prescribed in each State by the Legislature thereof; but the Congress may at any time by Law make or alter such Regulations, except as to the Places of chusing Senators.”

This section essentially says that states are responsible for running the elections in their state, but that Congress can set the overarching rules. Some argue that HR.1 oversteps Congress’s authority, while others believe that the bill fits not only the Election Clause but additionally aims to uphold the 14th Amendment which ensures Voting Rights for all citizens.

If the For The People Act does not become law, the fate of the hundreds of bills moving through the various state legislatures will govern our upcoming elections.

We would love to hear your opinion on the For The People Act, so please download the app and add your voice! Also, while you are at it, check out the democracy bills for your state as well!