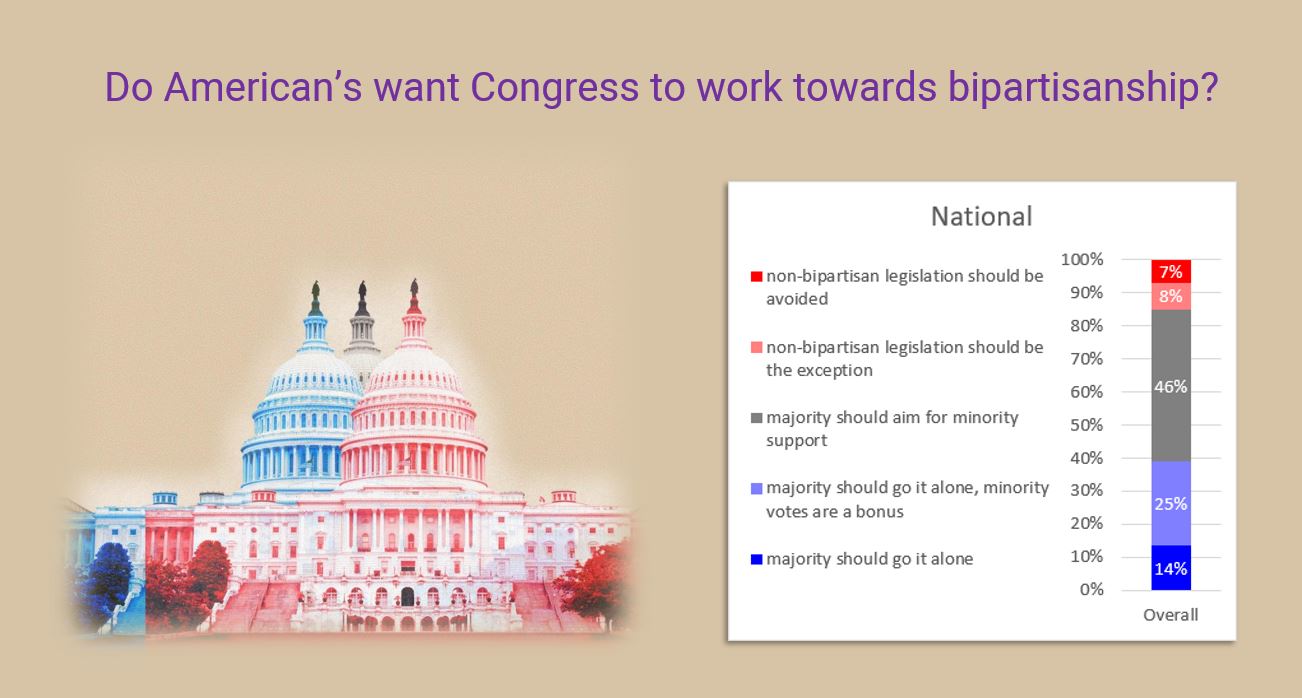 There has been a lot of talk about bipartisanship lately. President Joe Biden campaigned on his ability to work with Republicans. Senators Joe Manchin (D-WV) and Kyrsten Sinema (D-AZ) wrote op-eds in defense of the filibuster and bipartisan lawmaking. At the same time, the $1.9 trillion COVID-19 relief bill passed Congress strictly along party lines, not picking up a single Republican vote. So much for bipartisanship in practice.

We wondered what the country thinks about bipartisanship. Should it be pursued at all, should the majority just go it alone if they can, or should that be avoided? We asked the ActiVote users the question and gave them five answers to pick from:

Women (52%) support bipartisanship more strongly than men (42%) but are also more in favor of getting things done (41%) vs. gridlock when bipartisanship fails (7%). Although 20% of men believe that without bipartisanship, legislation should not pass, there are more (37%) who would prefer that the majority goes it alone.

Democrats are more focused on “getting things done no matter what”, with 51% believing that legislating comes first, and that minority votes are at most a bonus. Another 38% believe that bipartisanship is important, but only 8% think that without bipartisan support legislation should be stopped.

It is clear that more people in general would like us all to work together, than one party going it alone. At this time, with the Democrats having the trifecta, they are more eager to push through legislation rather than letting it die. We wonder whether the results of our poll would have been the same in 2017-2018, when the Republicans had the trifecta?

All in all, despite the significant support for bipartisan collaboration, the practice in Washington for the past few years has been that for major bills, such as the Affordable Care Act (Obama), the Tax Cut and Jobs Act (Trump) and the American Rescue Plan Act (Biden), when bipartisan support was not available, the majority will push through instead of being held back, expecting to be rewarded more for action than for inaction.