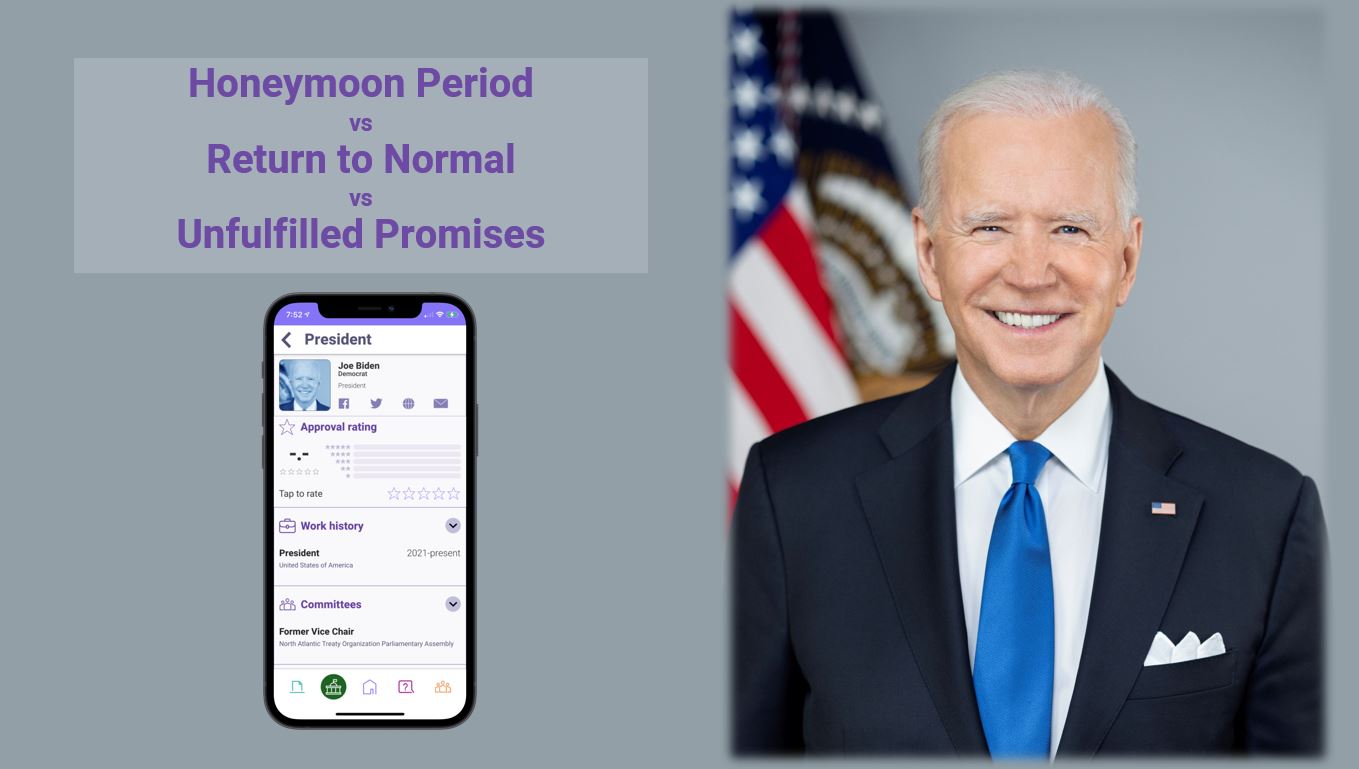 The main story in the mainstream media after nine months of the Biden presidency is about his declining approval rating which in most polls has slipped from a high of mid-50s to now a low of mid-40s. Some opinion writers are already looking ahead to 2024 and make comparisons with recent 1-term presidents like Jimmy Carter, George H.W. Bush and Donald Trump. Trying to predict the outcome of most sports games before the end of the 1st quarter is a fool’s errand and we believe the same holds true for presidential politics.

Instead of trying to predict the unpredictable, we set out to analyze Biden’s approval rating over the past nine months and determine where his support is softening or his opposition is hardening. We have split those nine months in 3 calendar quarters:

We were wondering how these very different quarters impacted Biden’s approval rating. Let’s start by looking at his overall rating on our 1-to-5 “tripadvisor style” rating:

The number of people disapproving of Biden has not moved all that much: it moved quickly up from 36% to 39% and stayed there during Q3. Those strongly approving of Biden is a different story. From a high of 33% it slipped to 23% in Q2 to just 20% today. There is currently a large group (25%) who are on the fence about Biden’s performance, rating him a 3 out of 5. 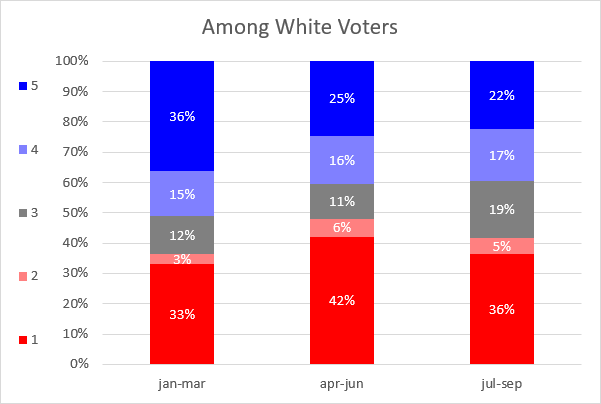 Among White voters, during Biden’s Honeymoon Period, 50% approved of him, but by the 2nd quarter this was down to 41%. The slippage to 39% in the 3rd quarter has been minimal. 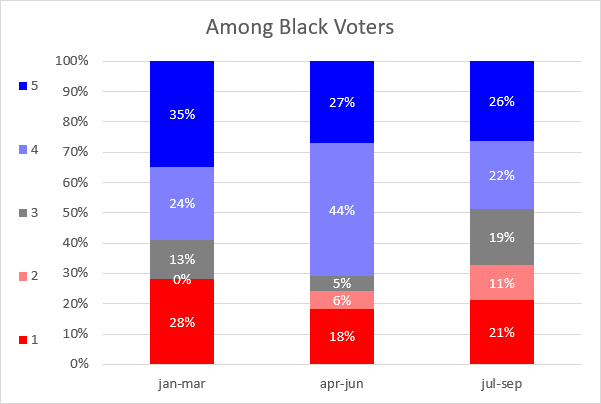 Among Black voters, there was an increase in approval in Q2 before falling back in Q3. The number of people disapproving of Biden remains relatively steady at around 3 in 10.

Almost 8 in 10 Democrats approved of Biden after his inauguration, which has slipped to just 6 in 10. While there is a small uptick in Democrats disapproving of Biden (from 12 to 17%), most of those who are disappointed are on the fence (up from 9% to 24%).

The Republican aversion to Biden is constant: about 3 in 4 strongly disapprove of what Biden does, but these numbers have not really moved during the past 9 months. The differences are in the other ratings where the rare Republican who approved of Biden (1 in 8 earlier in the year) has become even more rare (1 in 14 now).

Support from Independents has been falling from 30% strongly approving of his performance to almost none right now. However, that does not mean that independents are disapproving of Biden: the disapproval rating has stayed relatively flat (32%, 36%, 34%) over the past nine months.

It is clear that Biden’s score card has been slipping overall from an average 3.1 during his Honeymoon period, to 3.0 in the promise of Return to Normal and just 2.8 during the recent quarter of Unfulfilled Promises. However, upon closer inspection it does not seem to have turned staunch supporters into staunch opponents. Instead, his opponents remain as they were, and his supporters have gone quiet, realizing that the country has a lot of problems right now.

It seems more like that moment in a sports game where the home team is not doing well and the stands go quiet. They may not be approving of the performance, but they are not ready to switch allegiances to another team.

The silver lining for Biden is that some of his challenges seem to be on the mend: COVID-19 cases have fallen by about 50% in the past six weeks. There is no other unpopular war to withdraw from. Supply chain bottlenecks and inflation are believed by some to be transitory. And, perhaps, falling approval ratings, which will hurt all Democrats in the midterms, might just be enough of a stick for the progressives, moderates and conservatives in the Democratic caucus to find a compromise for their stalled legislative agenda. In that case, Biden’s approval rating may just rebound a bit in Q4.

Then again, supply chain bottlenecks may persist into 2022, inflation may get stronger and maybe the herding of cats in Congress with minimal majorities in both chambers may fail. In that case there is room for (much) more slippage.

We cannot predict what Biden’s approval rating will be when 2021 is behind us, but if our poll shows anything, it will be very much related to big economic issues that are affecting the country at this time.

Once again, it all boils down to “It is the economy, stupid!”.

Add your voice to our next approval rating poll!