Biden is Bouncing Back

Biden is Bouncing Back 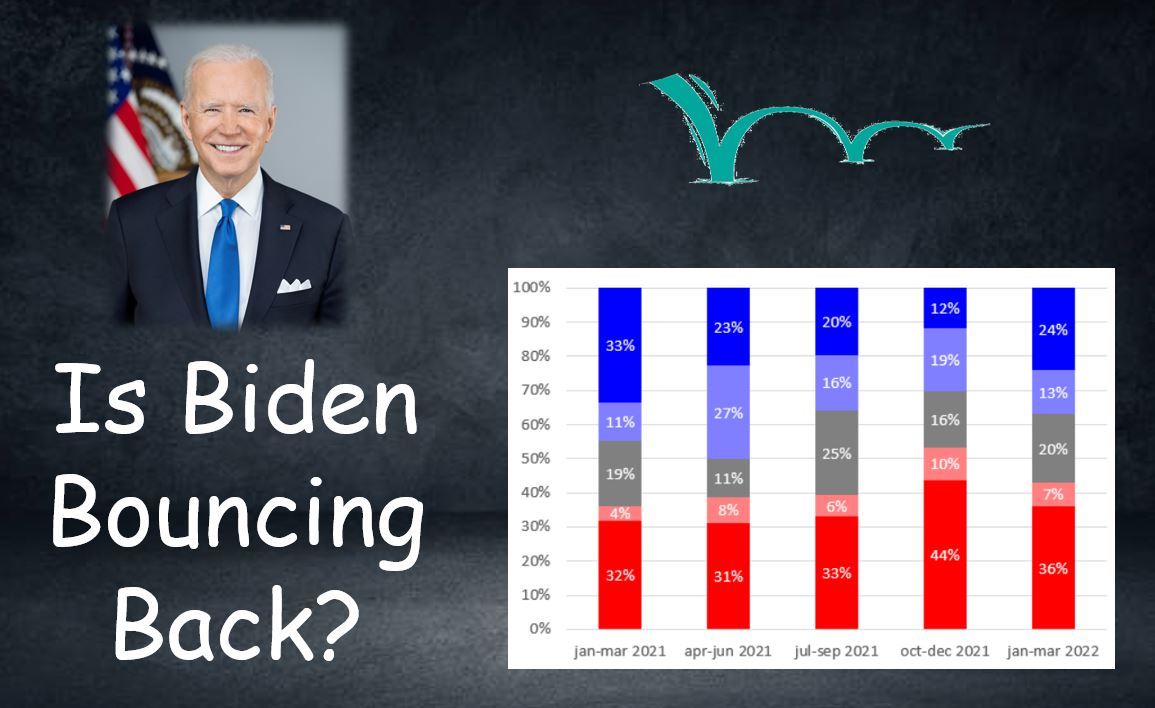 After sliding in the polls during all of 2021, last quarter Joe Biden bounced back from his all-time low. Our Q1 (January-March) poll among 1086 ActiVote users shows Biden receiving a 2.8 approval rating (up from 2.5). He is still 6% underwater with 37% approval and 43% disapproval, but that is a significant improvement from the 23% deficit he had in Q4 2021 (31% approval and 54% disapproval).

Let’s look at the details of where the Biden-bounce comes from:

The biggest jump is in people who strongly approve of the president’s actions (24% now, versus 12% in Q4 2021). At the same time there is also a general move to a less negative sentiment with a reduction of those strongly disapproving from 44% to 36%.

Women look more favorably at Biden today, than they did 3 months ago. Biden turned a 30% approval and 53% disapproval into 48% approval and 38% disapproval. That is a swing from -23% to +10% in just three months.

Another group who have embraced Biden in the past 3 months are senior citizens. A swing from a net disapproval of 10% to now a net approval of 12%. Perhaps those who still remember the Cold War and/or World War II are more influenced by the events in Ukraine and the stance of the Biden administration, than the younger generations are.

In Q4 there were few Democrats who were enthusiastically supporting Biden, but his overall net approval was still +26%. His net approval has hardly changed (+24% among Democrats), but far more people strongly approve of him today, and many others are at least on the fence about Biden, instead of showing disapproval.

There is virtually no change in how the large majority of Republicans see Biden: they don’t like anything they see, with consistently 74%-80% strongly disapproving of him. However, among the remaining 25% we do see a similar pattern as among the rest of the population: after sliding from initial support of 13% to just 7% support by Q4, Biden has now bounced back up to 11% support.

It is clear from this quarter’s poll: Biden is bouncing back and that is despite inflation still being rampant and gas prices at (almost) record highs which hurts many families economically. Perhaps the best explanation for the uptick in approval is that despite continuing economic challenges, there is also some good news for the Biden administration:

As always it is hard to predict where Biden’s approval will go in the next three months. What seems certain is that Ukraine will still play a role, as will inflation and gas prices. The only thing we can say for sure is that whatever happens, good or bad, Biden will be held responsible and see it reflected in his approval rating.

We will keep you posted in our next poll. In the meantime, let us know what you think of Joe Biden!