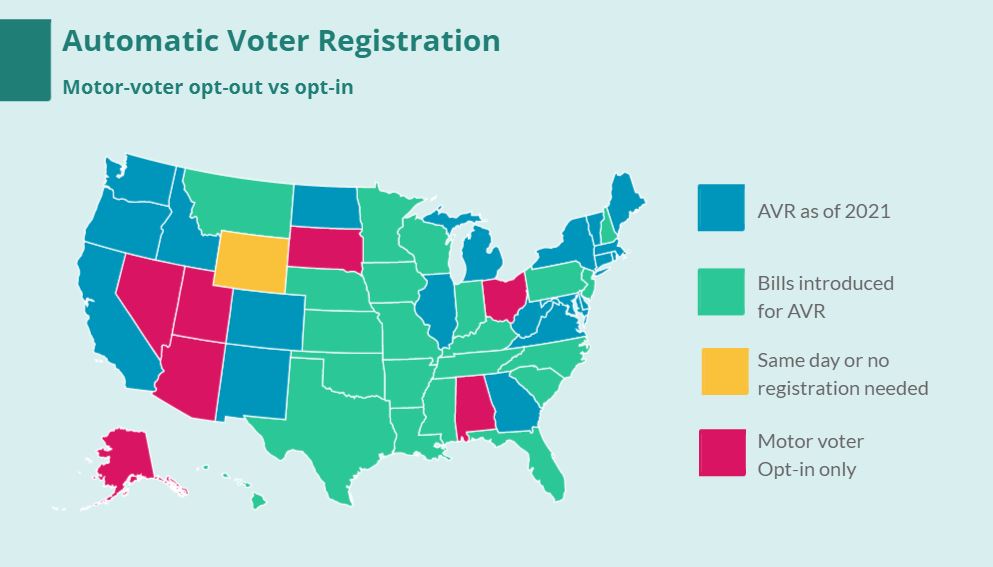 Tuesday September 28th, 2021 is National Voter Registration Day, a good day to reflect on how easy or difficult it is for people to register to vote. For some people, who have lived all of their adult lives at the same address, registering to vote may be a distant memory of something they did just once, many years ago. For others, who move around a lot, being registered to vote at their current address may be a recurring hassle that takes time and energy they could spare for other pressing matters. Especially for those people, Automatic Voter Registration can be useful: it ensures that whenever they interact with a government agency their voter registration is automatically updated to their new address, unless they explicitly wish to opt out.

We wondered what the country thinks about Automatic Voter Registration. We asked the ActiVote users the question and gave them five answers to pick from:

It turns out that a 51% majority believes that nation-wide Automatic Voter Registration should be federally mandated, and another 16% believes that all states should adopt it, meaning that 2 out of 3 users believe that everyone should have the benefits of AVR. Only 17% (1 in 6) believes that AVR should be discouraged or believe that it is unconstitutional.

Based on our polling it is clear that AVR is popular with many, but that the partisan divide may stand in the way of it being enacted nationwide, despite there being slightly more Republicans who are for it than against it.

In the meantime, many state legislatures have introduced bills for AVR and the number of states that have it is slowly expanding. The most recent additions are New Mexico in 2019, Virginia and New York in 2020 and Delaware in 2021.

At this pace of adding 1 or 2 states each year, “leaving it to the states” may in twenty years lead to what a clear majority of our country supports: Automatic Voter Registration for every eligible voter. An Act of Congress could speed things up and would be following “the will of the people”, but such an Act does not seem in our near future.

Add your voice to our future surveys!