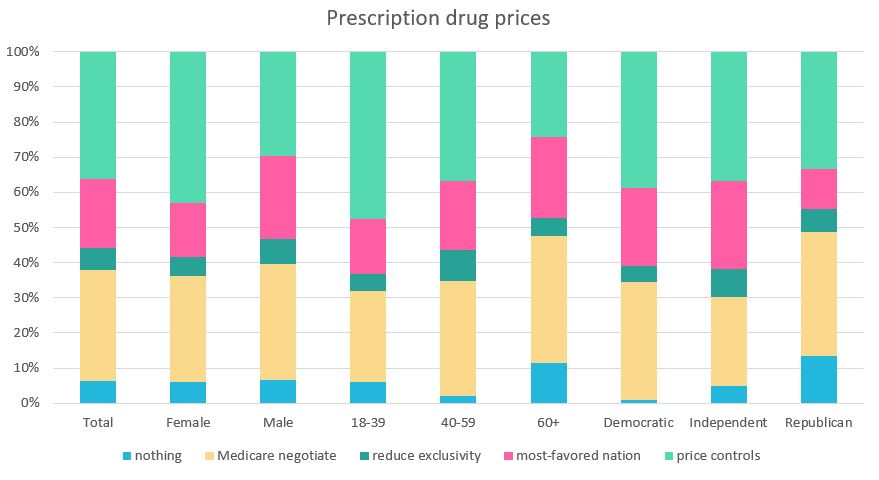 In recent years, pharmaceutical companies have significantly raised prices on drugs that have been on the market for years. Big pharma cites the need for research and development of new drugs as one of the reasons for these price increases. Due to patent protections (typically 20 years), there may be no generic alternatives available. There is also a law in the US which prevents Medicare, the single largest healthcare provider, from negotiating drug prices with pharmaceutical companies.

It seems that everyone agrees that prescription drug prices should come down, but so far there has been no consensus on what to do about it. Bills have been introduced in both the House and the Senate, and this week the House is expected to pass H.R. 3, Elijah E. Cummings Lower Drug Costs Now Act of 2019. However, it seems likely that neither the Senate nor the President will support this act.

A poll among ActiVote users made clear that the country is uncharacteristically united across party lines on what we should do or not do. First, very few people believed that the status quo is acceptable: only 6% believed we should do nothing and even among Republicans who are typically less inclined to support government interventions in the open markets, only 15% favored this option.

Among the four possible actions “reducing the exclusivity period” for drug companies, was the least popular: only 6% felt that this was the preferred action to take.

The most-favored nation clause, which is the topic of the Prescription Drug Relief Act introduced by Bernie Sanders in the Senate earlier this year, has some support with about 20% overall. The top-2 proposals, however, are to either institute price controls on prescription drugs (36%) or to allow Medicare to negotiate with the pharmaceutical industry (32%).

What does this tell us? Everyone agrees that prescription drug prices should come down. There are three methods proposed that have significant support: allow the US to derive its prices from what other governments negotiate (20%), drive prices down by letting Medicare negotiate (32%) and allow the government to create price controls regulations (36%).

With such unified support across the country for the overall goal and non-partisan support for various solutions that would lead to that goal, it is up to Congress to show that they can compromise on any smart combination of these solutions. It would not only help many Americans who are struggling to pay for their prescription drugs, it would also be a great example of how politicians can come together to solve real problems.

If you’d like to weigh in on prescription drug prices and other topics, please download ActiVote and participate in our polls.