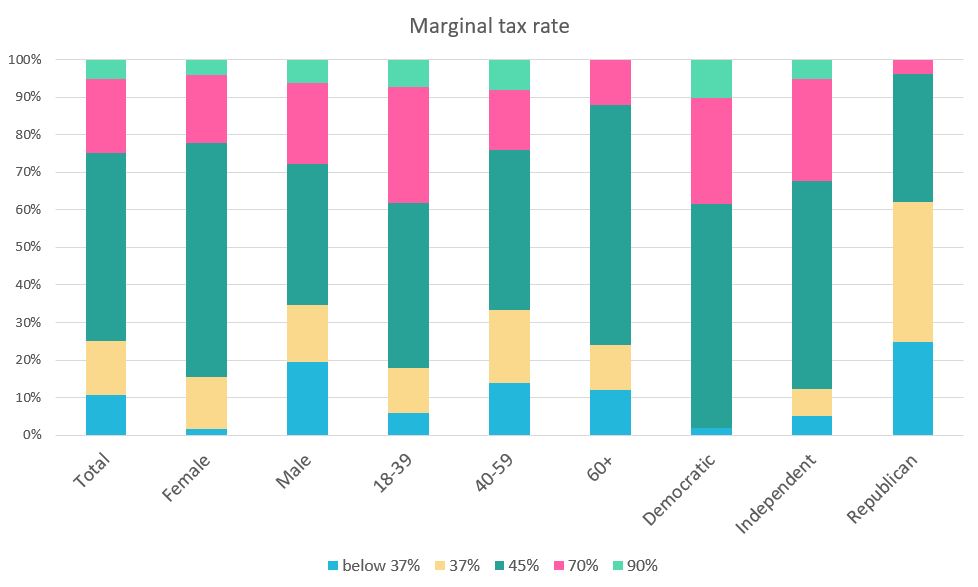 Recently, Democrats have suggested that for the highest earners the marginal tax rate should be increased significantly. Freshman Congresswoman Alexandria Ocasio-Cortez suggested that it should be raised to as high as 70%. The question now is what the American voters think.

An ActiVote poll asking about the Marginal Tax Rates for the highest earners shows that about 11% feels that the maximum tax rate should be reduced further below 37% and another 15% feels that 37% is about right. Still, almost 3 in every 4 Americans believe that we should raise the highest tax rate. Thus, the myth that Americans never like to hear about tax increases definitely does not apply to the tax rate paid by top earners only.

At the same time, only 5% of all voters feel that a 90% marginal tax rate, which could be interpreted as “punitive” is a good idea. Even just 1 in 10 Democrats support this idea.

The two remaining options presented were a somewhat modest increase to 45% and the AOC proposal of 70%. Anyone who is worried about the AOC proposal can stop worrying: there is not a single group of voters who are in majority in favor of such a tax hike. Even among Democrats this idea gets just 38% support.

A 45% marginal tax rate fares very differently: it has majority support from every single group, except Republicans: overall nearly 3 out of 4 voters support this idea, with slightly more female support and from the young and the elderly, but even 2 out of 3 middle aged voters (who are slightly more likely to pay that top tax rate) support it.

The big disconnect is between the parties. Democrats (98%) and Independents (87%) enthusiastically support a 45% marginal tax rate, but only 38% of Republicans are for.

Thus another myth can be debunked: most people are totally fine with taxes going up, as long as we are talking about those for top earners only.

If you’d like to weigh in on the marginal tax rate and other topics, please download ActiVote and participate in our polls.