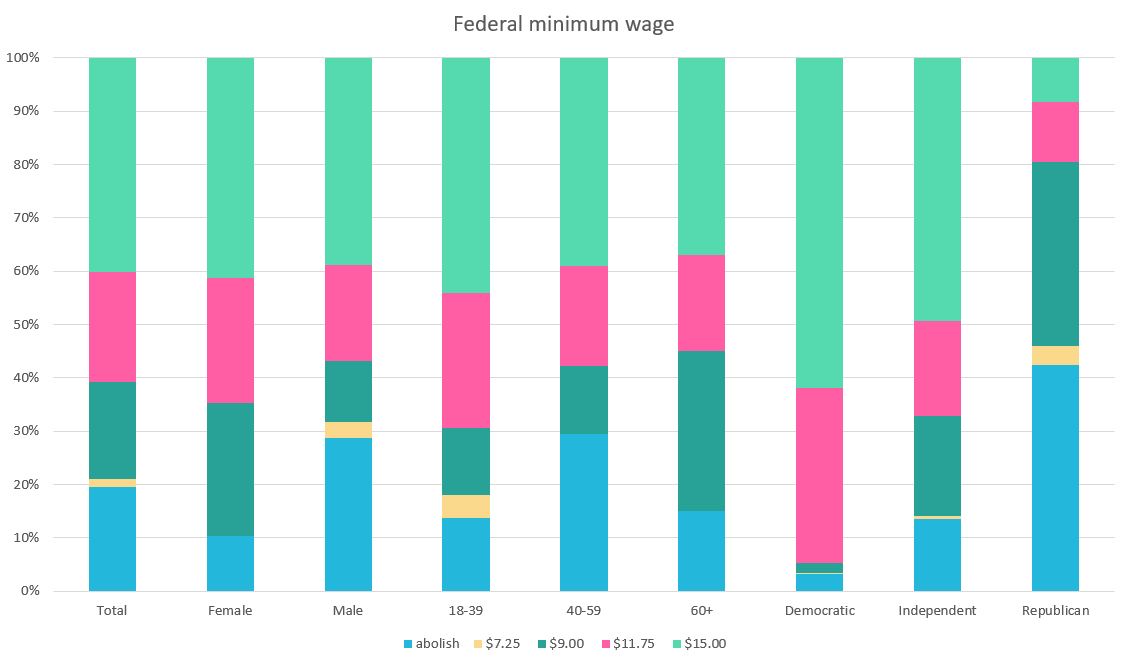 The Federal Minimum Wage was raised to $7.25 on July 24th, 2009. In the 10 years since then inflation has been approximately 20%, steadily reducing the purchasing value of that $7.25 wage.  An ActiVote poll asking about the Federal Minimum Wage shows that only 1% of respondents would like it to remain at $7.25. So, it seems to be time for Congress to do something. The question now is: what change could have the support of both the House and the Senate? For that we should look at the opinions expressed by various groups of people.

About 19% of all respondents would like to abolish the Federal Minimum Wage and leave it to the states, however 80% believes it should be increased, the only question is by how much?

There are some gender and age differences, with women and younger voters preferring larger increases than men and middle-aged and older voters. However, the biggest differences are along party lines.

While a significant majority of Democrats (62%) favor an increase all the way to $15, there is no overall majority support for this as only 49% of independents and just 8% of Republicans support such a large increase. With only 40% overall support, this will be a tall order to get passed into law.

The picture changes if we look at raising the FMW to $11.75, which represents the highest minimum wage has ever been in the past 50 years after being corrected for inflation.

This has majority support in the country (61%), as 95% of Democrats, 67% of Independents and 19% of Republicans support this. Thus, this might easily become law under a Democratic President with a Democratic Congress, but will likely not get a vote in a Republican-majority Senate as we have today.

A more modest increase in the FMW to at least $9.00 has overwhelming support of 80% of respondents overall and majorities of all groups: Democrats at 97%, Independents at 86%, and Republicans at 54%. Ignoring the politics of the situation and the current dynamics in Washington, a $9.00 minimum wage bill should have bi-partisan support in both the House and the Senate and therefore should have a good chance of becoming law.

What does this tell us? Instead of focusing on the polarizing ends of the political spectrum, where some want to abolish the Federal Minimum Wage, and others want to fight for $15, why not act now in a bipartisan manner and give 1.7M minimum wage workers an immediate wage increase of 24% by raising the Federal Minimum Wage from $7.25 to $9, while leaving further battles about where to go in the long run for another day? Don’t let perfect be the enemy of the good!

If you’d like to weigh in on the minimum wage and other topics, please download ActiVote and participate in our polls.

If you would like to read more about the minimum wage and the statistics around it, have a look at USA Facts and their research piece.